Author Event: Ingrid Andersson with Jordemoder: Poems of a Midwife 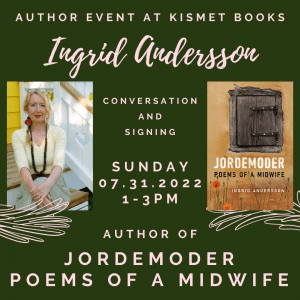 *Please note: As we are located in a historic building, our event space requires you to ascend a flight of stairs.

“Jordemoder” is a very old Swedish word for midwife that means “earth/land/world mother.” Jordemoder: Poems of a Midwife traces an arc in the life of a Swedish-American mother and midwife who descends from twelve generations of farmers in Småland, Sweden.

Join jordemoder Ingrid Andersson in a conversation around poetry, pregnancy, birth and parenting as she has experienced and contemplated these in both Sweden and Midwest America, past and present. Conceived on the Swedish island of Gotland and published by Holy Cow! Press in Duluth, this intimate collection spans cultures, species and ecologies – from Ingmar Bergman to birth in a caul to backyard hens. Expect a fertile discussion!

Twice-nominated for a Pushcart Prize and winner of an Eastern Iowa Review Editor’s Choice Award, Ingrid’s writing has appeared in articles, anthologies and journals nationally and internationally. Her poetry has appeared in Ars Medica, Intima: A journal of narrative medicine, Hippocrates Awards Anthology, Literary Mama, Midwest Review, Plant-Human Quarterly, Torrey House Press, Wisconsin People & Ideas and more. Ingrid holds degrees from the University of Wisconsin-Madison in Swedish and German language and literature, anthropology and nursing. A nationally board-certified nurse midwife of 20+ years, Ingrid has caught more than 1000 babies at home. She lives in Madison, WI with her Swedish husband, son, chickens and bees. Jordemoder: Poems of a Midwife (April 2022) is Ingrid’s debut collection.

Are you looking for enrichment, classes, or after school activities for kids in the Madison area? We are fortunate to have so many great...

Fun, Family Event Coming up August 23 at the Madison Mallards...

Sunflower Fields to Visit Near Madison, WI in 2022