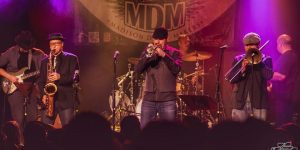 The new Madison, Wisconsin based horn band, RARE ELEMENT performs high-energy instrumental funk music in a truly unique manner.  The band’s highly talented roster coupled with it’s creative and intricate arrangements make Rare Element a must-see act.
Chad Whittinghill (trumpet, flugelhorn) and Bryan Husk (tenor, baritone sax) first met in 2003 as members of the urban neo-soul band, VIBE SYNDICATE.  Unbeknownst to them, they would spend the next 16 years playing side by side at hundreds of shows with some of Wisconsin’s finest funk and blues bands.  For years, they honed their skilled working together with CLYDE STUBBLEFIELD’s weekly Funky Monday shows.  Later, the two would team up with Hammond B-3 ace Jimmy Voegeli and his blues supergroup, THE JIMMYS
A while later, they crossed paths with Nat McIntosh (trombone) and the horn section was born.  Nat is a long-time member and composer for the phenomenal YOUNGBLOOD BRASS BAND. Over the years, they shared a common goal to create  a band where this horn section could be pushed to it’s limit. Finally, in 2018, a roster of highly skilled musicians was assembled to make this goal a reality
They named that band…RARE ELEMENT.
2019 MAMA Award Winner Todd Phipps (keyboards, B3 organ) of  THE BLUE OLIVES (and many other bands) was the first join.  Recently, Todd was honored with his addition to the roster of Hammond Organs endorsed artists!
Longtime Madison talent, Joe Niesen (guitar), also got in early.  Joe is an incredibly funky guitarist and can also be seen with the great Madison band Don’t Mess With Cupid.
Joining us on 6 string bass is the extremely talented Josh Cohen.  Josh can be seen all over the midwest blowing peoples’ minds with his incredible mastery of the electric bass.  He is endorsed by Gruv Gear, Phil Jones Bass, and La Bells Strings.  Josh’s arrangement of Herbie Hancock’s “Chameleon” was ranked the #1 bass video of 2015 by No Treble Magazine.
The critical piece of the puzzle was finding the right drummer to keep it funky.  Enter Mark Marsh, 2016 WAMI (Wisconsin Area Music Industry) Award Winning Drummer of the Year.  Mark brings relentless energy and deep groves to every performance.
Tickets $15 in advance, $20 at the door