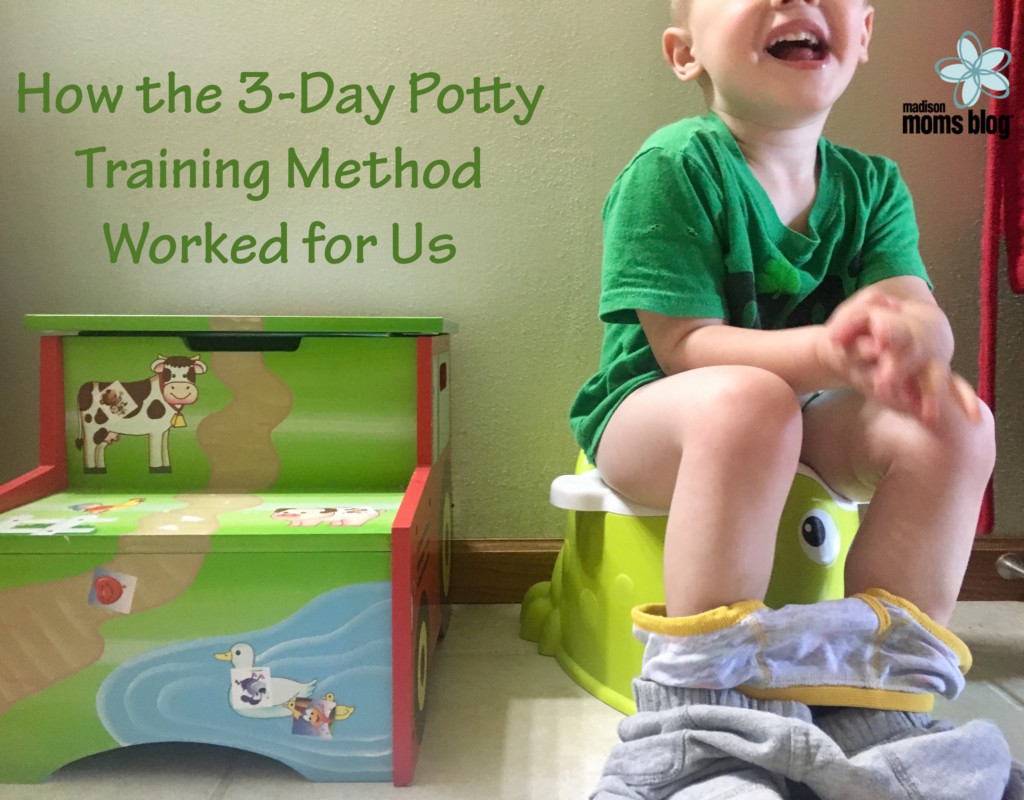 Our son turns 3 in June, so we decided to try potty training a couple of weeks ago to get him ready to transition into the three-year-old classroom at his preschool. Roughly half of the kids in his class are potty trained and he had been showing some interest. We switched to Pull-Ups a few months back, so he could learn how to pull them on and off by himself to help him get ready.

My friend used the 3-day potty training method with her two boys, with great success. She sent us the manual so we could give it a try.

Potty training over a long weekend sounded like a nightmare to me…When my husband proposed trying it back in January, I wasn’t quite ready. However, when he suggested it again a few weeks ago, I figured it was time.

We had a potty chair in the main bathroom and set up a small travel potty in the basement bathroom in case he needed to go while we were playing downstairs. That seemed easier than trying to train him on the big toilet.

Easter had armed us with a bunch of goodies the weekend before, so we decided to offer him a treat from his basket as a reward for each time he “did his duty” on the potty.

We started right away Saturday morning by letting him pick out a pair of new undies from his drawer. He had his first accident a couple of hours in – which was normal and to be expected. We just got out a new pair, changed his pants and got right back down to business.

After the third accident of the morning, though, we started to wonder if maybe it wasn’t the right time after all.

He was overtired from not sleeping well the night before. And refused to take a nap as usual. So understandably, he started to get frustrated (as did we) as the day went on. Around 4:30 p.m., we decided to hit the pause button and try again in the morning. We put him in a Pull-Up for bed that night – going against what the manual told us to do.

After a good night’s rest, we were ready to resume training on Sunday. What a difference a day made! He only had one accident all day long.

Since he had done so well throughout the day, we decided to take him to his Music and Movement class that night. (Even though we weren’t supposed to leave the house those three days.)

He made it there and back with no accidents. (Granted he used the potty 5 times during class). So we opted to leave him in undies at bedtime, to see how he fared overnight.

Miraculously, he slept through the night and woke up completely dry. I couldn’t believe it. I had fully anticipated having to get up and strip the bed in the middle of the night, or certainly in the morning. But nope. He made it through the night with no accidents!

That morning, I had him put the rest of his Pull-Ups in a bag to donate to his school. To reinforce that we were done with diapers for good. Which, admittedly, is what we were supposed to have done on day 1. (Clearly we aren’t very good at following rules.)

My husband stayed home that Monday, to give our son the third day of training this method recommends before heading back to daycare. He had two “crapcidents” that day, but otherwise seemed to be getting the hang of it. So back to school he went on Tuesday.

I told his teacher he was all done with diapers and Pull-Ups. Even for naps. We did not want to go back and forth between the two, so as not to confuse him. If we put him in Pull-Ups sometimes, how would he know when he should or should not go to the bathroom in his pants? I also asked that they give him extra potty breaks throughout the day to help him stay dry. And guess what? His first day back at daycare was accident free.

It was his second day at school where things seemed to take a turn…When I arrived to pick him up, he took one look at me, and I could tell he’d had a hard day. Turns out, there were multiple crapcidents that day. Once at home before school. And then again, three times at school.

I wasn’t sure what went wrong. But I also knew there was no going back at that point. We were going to have to push through the trouble with #2.

I told him if he was accident-free the next day, I’d take him to get some ice cream after school. Maybe that would give him a little extra motivation?

Thankfully, there were no accidents at school the following day. So, I decided to take him to Noodles for dinner. Which would be followed by a trip to Orange Leaf for the frozen treat I’d promised him.

I had a clean change of clothes in the car, but didn’t think to bring the diaper bag into the restaurant with us because he was a big boy wearing undies now!

When he told me he had to go during dinner, I rushed him to the restroom and sat him down, propping him up awkwardly with my hand, so he wouldn’t fall in. We had not yet navigated public restrooms since he’d learned how to use the potty. And the toilets were much larger than what he was used to at school. (Maybe training on the big potty would have been a good idea after all…)

After a few minutes, he told me he was done and no longer had to go. So, we washed up and returned to our table.

Not even a minute after we sat back down, he looked up at me with panic in his eyes. And I knew exactly what that look meant.

I picked him up and rushed him back to the bathroom. But it was too late. There I was with a messy (and sad) toddler, and no diaper bag, wipes or clean clothes.

I cleaned him up as best as I could, and escorted him out of Noodles, repeatedly asking him why he hadn’t gone to the bathroom the first time we went. I wound up changing him in the back of the car, like I used to when he was a baby. Then drove straight home and put him in the bathtub.

I knew I hadn’t handled things very well, but I was frustrated and discouraged. The manual said I was supposed to be positive and upbeat and not scold him for having an accident. I felt bad for the way I’d reacted. It wasn’t HIS fault I wasn’t prepared.

Nevertheless, it must have left an impression. Because the next morning, he announced that he was done pooping in his undies. And so far, he has made good on that promise. It’s been two weeks since the last crapcident. Therefore, I think it’s safe to say he’s officially potty trained.

So while we did not follow the 3-day method to a T, it did seem to work. (Though was more like 5).

If you haven’t yet potty-trained your child, here are a few tips from someone who just went through it:

For those of you who’ve already done it, what potty training methods worked for you? Please share in the comments below.