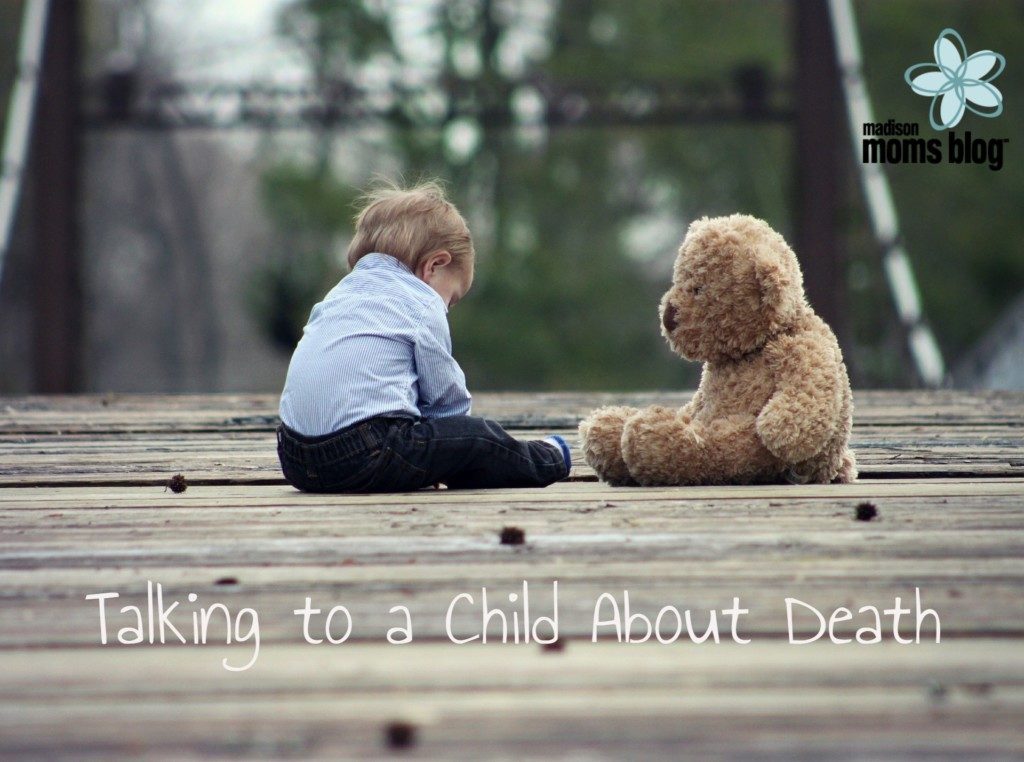 My son is 3 ½ years old and has already had three experiences with death.

I have no idea how to talk about death and dying with a child. However, that doesn’t mean I shouldn’t try.

When my cousin passed away unexpectedly last spring, I got the call from my mom around 7:30 a.m. on a workday. I was the first person up in our house that morning and had just gotten out of the shower when she called. After we hung up, I went to share the news with my husband who was still in bed at the time. Which was the exact moment our son woke up and toddled into our room.

As I choked on the words “My cousin died”, I started to cry. I hadn’t really cried in front of our son, so he immediately took notice.

He climbed into our bed and said “Mama, what’s wrong?” All I could say was that I was sad because we had lost someone we loved.

How do you explain death to a toddler?

I realized that “lost” has a different meaning to a child. Children lose toys. Or they get lost in the store. Losing someone, to a kid, probably means that eventually they will be found.

So, I took a deep breath and instead tried to communicate in words he might understand.

“Remember in the movie Iron Giant when the deer falls down in the woods? And Hogarth tells the Giant not to touch it because the deer is dead?” I said.

“Well, my cousin died too. Like the deer. Which means we won’t ever see him again.” I continued.

My sweet, empathetic boy leaned in to hug me. And I cried some more.

“Well, because he was sick. And sometimes when people get really sick, they don’t get better.” Again, I tried to choose my words carefully…Because I didn’t want him to think he was going to die the next time he caught a cold.

I knew he probably did not understand. However, it was the best I could do in the moment.

When the time came to honor and celebrate my cousin’s life, the service took place in his aunt’s backyard. On a beautiful Saturday afternoon over Memorial Day weekend. There was food, drinks, and family. And while there were plenty of tears, my son wound up playing in their neighbors backyard during the service.

I’m pretty sure he thought we were at a party.

Then, six months later, my college mentor passed. Unfortunately, just three weeks shy of an event planned in her honor. I hadn’t seen her in several years and knew her health had been declining. However, I was excited to attend the reception recognizing her years of service and incredible impact she had on the institution, where I now work. I was excited to show her pictures of my son. And update her on my new position at the University.

Sadly, I never got the chance.

The University opted to hold the event in her honor anyway. Knowing that many people were planning to be in town for that, her family held her memorial service earlier that same day.

After attending both events, I was riding a roller coaster of emotions. I had spent the whole day trying not to cry. So, when I got home after that long, emotional day, I went straight to my room and broke down.

I heard my son ask my husband “What’s wrong with Mama?” Shortly after that, I heard the pitter-patter of his little feet coming down the hall.

“Are you okay Mom?” he asked as he entered the room.

I looked up with teary eyes and told him “I’m okay Honey. Right now Mama is just sad.”

He asked me why I was sad. I told him “Someone I love died. And I’m sad because I’m never going to see her again.”

He did not ask questions this time. He simply seemed to understand.

He hugged me and asked again if I was okay. I told him I just needed a minute, but after that, I would be fine.

Later that week, as we drove home from school, he suddenly asked me who my daddy was. As you may have read in a previous post, my dad passed away when I was not quite 2 ½. I told him my Daddy was the man in the picture on his bookshelf. The one who watches over him while he sleeps.

“But where is your Dad?” he probed.

“Well honey…my Dad died when I was little,” I told him.

“He DIED?” he asked incredulously.

“YOU’RE not dead,” he replied.

“No, I’m not dead either” I confirmed.

Maybe he doesn’t get it…I thought.

How can I help him understand death?

Sadly, a third opportunity came along earlier this month, when my husband’s grandmother passed away. This time my son knew who it was. He had been to visit her several times.

When we got the call telling us she was gone, I told him we were going to go to Grandma and Grandpa’s for the weekend. But that this time we were going for a funeral. To say good-bye to Great-Grandma.

I had no idea how he would do at the funeral, with no playground next door to distract him. However, I also felt it was important for all of us to be there.

Thankfully, he was on his very best behavior at the church. A place he was already familiar with since we had our family Christmases there the past few years.

He made his rounds to say hello to everyone during the visitation, which was an hour and a half long. He sat quietly and calmly in the pew, and made it through the hour-long service with no meltdowns as well.

At the end of the service, the Pastor invited everyone to say their final goodbyes to the deceased.
When I asked my son if he wanted to say good-bye to Great Grandma, he jumped off the pew and enthusiastically said “Yeah!” He walked to the front row, peeked around his Great-Aunt, and looked back at us confused.

It broke my heart.

I choked up as I picked him up to carry him as we all walked out of the church together.

Once we were back in the church hall, he looked around and asked “Mama, why is everybody crying?”

I told him everyone was sad because Great-Grandma was gone and we were never going to see her again.

That is when it happened.

My little boy broke down and cried.

I hugged him tight, as I knew in that moment that he finally understood what was happening. I rubbed his back and tried to soothe him as he processed why we were all there.

His reply? “Because Great-Grandma is gone.”

As with most funerals, a luncheon followed the service. My sweet boy remained sad through lunch. Which made me second guess bringing him and exposing him to death and dying.

Nevertheless, I also understand that death is a part of life. I was exposed to it at a very young age as well. And while sad, I learned early on that life can be hard. And unfair. That is just the harsh reality of it.

However, I know that in the midst of sadness and pain, life can also be so incredibly beautiful.

In the words of Alfred Lord Tenneyson, “’Tis better to have loved and lost than never to have loved at all.” How fortunate that my son had an opportunity to meet his Great-Grandma, and my cousin, before they passed.

Is this the right way to talk about death with a young child? I honestly have no idea. However, I know my job is to help him learn, to understand and navigate life. Even, and maybe especially, the difficult parts.

My job is also to provide comfort during tough times. To let him know that it is okay to feel sad. And it’s okay to cry. And, most importantly, to be there whenever he needs me to wipe his tears away when he is ready to move on. 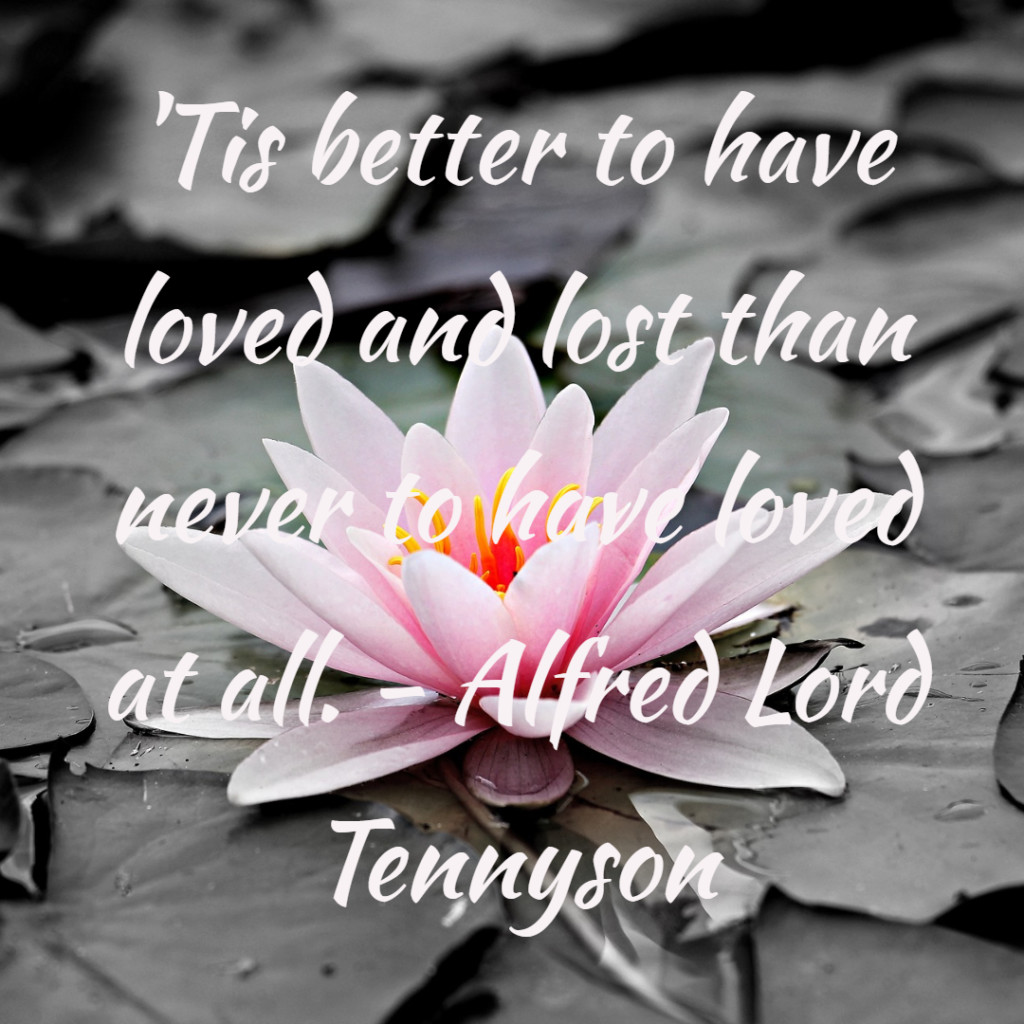