Lately, it seems that I’m hearing a lot of my recently turned 2-year-old’s new words and phrases for the very first time during a frustrating parenting situation.

During this exchange, I’m often torn between being so impressed and proud of her newfound communication skills and really frustrated by her 2-year-old tantrum (oh yeah, she’s definitely a toddler now!).

In one instance, my daughter and I were in a bit of a tussle over a clean (thankfully) diaper in the midst of a diaper change, and she started screeching, “Let go!” Or, the other day she was dragging the empty bedroom trashcan around the house while I was trying to put a new bag in it, and when I told her to put it down, her response was, “I want it!”  Another time, my husband was in her way while she was riding her bike around the living room, and she started shouting, “Move dada! Move dada!”  Inwardly, I’m wondering, “When did she learn how to say that?”, as I grit my teeth and not-so patiently repeat my request for the third (or fourth) time. 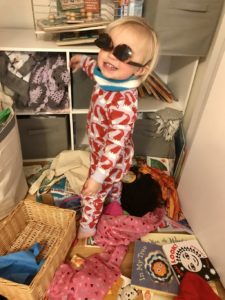 I can’t help but to feel sad as I wonder if this development is yet another example of things I miss out on while she’s at daycare and I’m at work, as she practices communicating her wants and needs with her classmates?

Instead, I find myself witnessing these new accomplishments during a stressful time where I would honestly really just rather she stop whining and listen, so we can move on with our day.

As we continue into the toddler years and beyond, I know that this is just one of the many instances where I will be annoyed, frustrated, or upset at her, and, at the same time, proud of her quest for independence.

So, as hard as it may be in the moment, I will work on pausing my frustration at the never ending diaper change or futile attempts to change the trash bag, and recognize just for a moment the little person that she is becoming, one who knows exactly what she wants, and how to tell me that. And I’ll be proud of her in that moment.