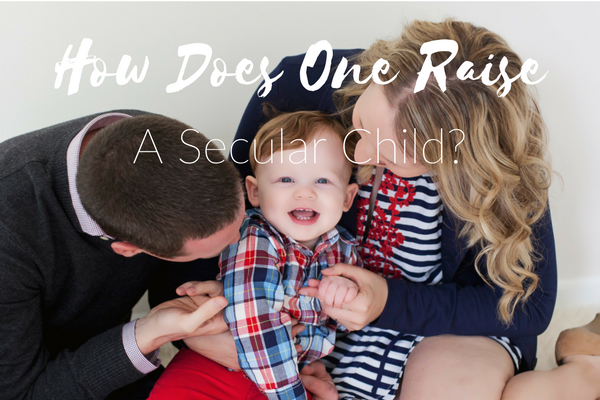 When my wife and I started discussing whether or not to have kids, the issue of religion came up over and over again. Neither of us are religious, but both our families are devoutly Catholic. Having grown up in that environment, neither of us knew how to raise a child without the guidance of an organized religion. We also weren’t aware of anyone else in our circle of friends who were actively raising their children without religion. The question then became, if we had kids, how would we raise them to be open-minded, ethical people with a good moral compass without religion? We knew it was possible, but we weren’t sure of the best way to proceed. It felt pretty overwhelming. So much so that we were hesitant to even start a family. Ultimately, we decided it was silly to let fear of the unknown prevent us from having kids and so we started our family.

Where Do We Begin?

During our search we found two books, Parenting Beyond Belief and Raising Freethinkers, which helped to provide a framework for how we plan to raise our son to become a morally sound individual.

Parenting Beyond Belief is a book which consists of several essays from numerous authors. The intent of the book is to help the reader think through many of the topics that are typically the domain of traditional religion. Some of things written about in the book are:

The book prompted me to explore in further detail answers to questions I had only thought about in passing.

The second book, Raising Freethinkers, is meant to help supplement the previous book by acting as a resource / guide. All of the chapters have a questions and answers section to commonly asked questions. There are activities that can be done with various age groups to help instill various ethical principles, as well as ways to promote a curious mind. The book also has a list of further resources should the reader want to dig deeper into a particular topic.

Creating Our Own Family Values

After finishing the books, my wife and I decided that we plan on raising our son with the following set of values.

The Golden Rule is golden. Some iteration of this rule exists in all religions / cultures and is as good of a universal “rule” as you’re going to find. We feel that if you follow this rule you’ll have a pretty good foundation upon which you can build the rest of your virtues.

In addition to The Golden Rule, we found 8 secular virtues, referenced in Parenting Beyond Belief, that we wanted to instill in our son.

Putting It All Together

One of the things that became evident during our search was how similar our plan turned out compared to the religious values our parents had instilled in us. I guess too often, we as a society, spend so much time focusing on our differences that we fail to see our similarities. And while it will be hard to perfectly model these values, I feel pretty good knowing that we have a good plan to help us along this path. With any luck our son will turn out to be an open-minded, ethical person with a good moral compass.