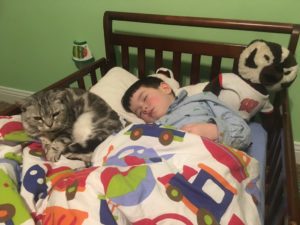 My son has slept in his own toddler-sized bed the last two nights.

This might not seem like such a monumental achievement. After all, he is nearly five years old. It’s a bit absurd he was still snuggled up with his parents every night anyway.

Baby gates in the doorway

We haven’t always been such pushover parents. Three children ago with our oldest son, we dutifully transformed his baby crib into a toddler bed the moment he achieved toddler status at 18 months. Repeatedly, we led him back to his bed when he escaped and toddled out to find us. We read books with him, did puzzles, and slept on his floor to ensure he fell asleep in his own bed. Eventually, we resorted to baby gates in his doorway and steeled ourselves against his cries.

By the time we welcomed our fourth and final child, our bed was bigger and our patience thinner. Soon after we moved our youngest out of his crib, he started to find his way his way into our room on a nightly basis. We would wake up with an elbow in our eye or a foot in our back. Some nights were less tumultuous though, and we would awaken peacefully to a warm child curled around one of us.

Go back to bed

Initially we did give a halfhearted effort, mumbling, “Go back to bed…” as we rolled over and pulled up the blankets. But eventually, it just became the norm. When visiting relatives, we’d tell them not to bother finding an extra sleeping space because our youngest would just sleep with us.

The last several months, the sleeping arrangement has gotten old. We wake up in the middle of the night overheated with a sweaty little boy pressed too close and must tiptoe around the room in the morning, groggy but unable to flip on the lights.

But despite these annoyances, I find myself watching him after he falls asleep. The long, dark eyelashes resting on his cheeks. His rosy cheeks and full lips. I snuggle close and breathe in a peaceful moment with a little boy who is rarely quiet anymore. He’ll be in Kindergarten next year, but he still feels like my little baby.

Two nights ago, he announced, “I’m going to sleep in my own room tonight.”

“Great! You’re such a big boy,” we said exchanging knowing glances, confident he would make his way into our room before the night was over. (He did sneak into his brother’s room that night but never made it downstairs.) We awoke the next morning, surprised to find our bed empty of any children for the first time in a couple of years. It was reminiscent of the first time your baby sleeps through the night, and you’re happy about it in a startled sort of way.

We praised him and high-fived each other, assuming it was a one-night stand. But the next night, our boy announced again, “I’m going to sleep in my bed tonight!”

After stories were read and teeth brushed, the children dispersed to their rooms, our youngest among them. And he slept there all night.

“This is great!” my husband proclaimed, assuming control of his entire half of the bed.

He doesn’t need us as much anymore

Somehow, I didn’t feel so celebratory. Granted, no small, bony knees were digging into my ribs, and I had my pillow all to myself. But, I felt a little sad too.

He doesn’t need us as much anymore.

And he’s the youngest, and the final, so no one will need us as much anymore.

He’s not afraid to sleep alone in his room. Soon he won’t need us to tie his shoes or hold his hand crossing the street. Before too long he will be annoyed by our presence rather than delighted.

He’ll turn out all right

This wasn’t so jarring with our first child. We planned for and obsessed over every milestone. We scrutinized his accomplishments for proof of his normalcy and our competence. From solid foods and first steps to growth charts and car seat graduations, we were by the book. By number four, we’re a little more laid back and a lot more lazy. He’ll turn out all right! Right?

We also know these stages that seemed so eternal the first time around (Will the sleepless nights ever end?) are actually fleeting and precious. And this time around will be the last time around.

I won’t mourn some phases. Good riddance to dirty diapers and daycare costs. But some passages are tough. And this one has been.

I’m so proud to watch him grow into an independent little boy, but at the same time I’ll miss that sweet, cuddly toddler who only felt safe nestled close to his mom and dad. The bittersweetness of motherhood.