Let’s be honest – I fail at motherhood about 100 times a day. Too much Daniel Tiger before school, frozen waffles for breakfast, forgetting backpacks or snacks or water bottles on the way out the door, losing my temper when someone just wanted my attention or just plain having a bad day. I know these aren’t really failures – they are just things below my expectations for myself as a mother. But there was a time last week that I really, truly did fail, and it was definitely a turning point for me as a parent.

The day started out well. My son woke up in a great mood, played nicely with his little sister all morning, and told me over and over again that he was going to have a GREAT day at school. For us, that means he doesn’t end up hurting himself or others, controlling his body and not getting too “wild”. As simple as that sounds, for my son, it’s a struggle every single day. He loves to play rough. He loves to climb and run and spin and push and hit and bump and a host of other totally not-school-appropriate things. But this day, I was sure, he was totally on top of it and was going to have a GREAT day.

Nope. Wrong. This day started promising and ended with a big fat thud. He threw a toy at a friend on the playground. He got “kicked out” of the sandbox for throwing sand too many times. He was wild and excited and completely out of control. Luckily his friend was okay but I was not. I picked him up that day and felt like I needed to run back to my car with my tail between my legs. I was embarrassed, frustrated and about to burst into tears. WHY DID YOU DO THAT?! I wanted to scream. WHY CAN’T YOU JUST PLAY NICELY?! I wanted to scream. WHY WHY WHY WHY WHY?

I tried to be calm but inside I was devastated. This isn’t our first incident or our first bad day at school. There have been lots of conversations with his incredibly sweet teacher about other very similar days…days where he hits or throws sand not just once but OVER and OVER again. My son has great intentions but in the moment he Just. Can’t. Control. Himself.

For whatever reason, this day really hit me. I started off wondering what I was doing wrong as a parent but morphed into thinking something was wrong with my son. I questioned whether his behavior was “normal” for a 4 year old or whether I needed to make an appointment with his pediatrician stat. I met with a friend and cried about how worried I was about him, how worried I was that he wouldn’t be successful in elementary school, that he’d struggle to have friends or get labeled a certain way by his teachers. I worried and worried and worried about the person he would become someday if we didn’t stop his behavior RIGHTNOW.

My friend gave me a total reality check. “Who he is today is NOT who he will be tomorrow or next year or as an adult”. Well, duh. Obviously that’s true, but why oh why have I been weighing him down with the weight of my own fears and expectations? 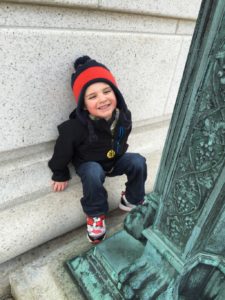 I felt like this time I really did fail at motherhood. Instead of knowing and trusting that our son would become the best possible version of himself, I was imagining worst-case-scenarios of him, fearing he would sit at lunch alone in elementary school, get into fights in high school or burn down houses as an adult. I mean, seriously, I was totally nuts.

My son is SO little. And he is an absolute heart melter in the body of a tornado. He stuck a heart sticker on my chest today and told me it was to remind me how much he loves me. He woke up on Mother’s day and was the first to wish me a Happy Mother’s Day. He made me a gift in preschool using my favorite color – purple. He tells me he won’t go to college because he wants to live with me forever. He tells me he wishes he had two of me so that when I go to work he would still have “me” with him.

He is my HEART. He is a million amazing, kind, sensitive, thoughtful things with just a few little issues to work on. I mean, doesn’t that describe most everyone, adults and kids alike?

I’m sorry I failed you, my dear boy. I’m sorry there was even a moment I doubted you, that I thought a bad day (or a million bad days) in some way defined you. NO ONE should be judged on just their bad days, but especially not a four year old boy. I will never, ever, ever do it again. The thing is, no matter what the future holds, good, bad or upside down, I’m going to love you through it. Even on your worst day, I will be there to pick you up, dry your eyes, kiss your sweet cheek, snuggle on the couch, eat a cupcake, go for a bike ride or WHATEVER it is you need from me.

We got this, buddy. 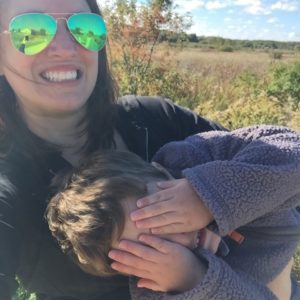