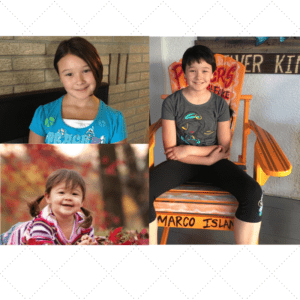 We are a family of women. All five of us. The only “man” in the house is our dog Augie. When we found out we were pregnant the first time, we did not find out the gender, because honestly it didn’t matter. We were just excited to have a baby. And then she was born. Our precious little girl. She was amazing in every way. As soon as the word was out that she was a girl, then the “girl” stuff started coming in. Cute dresses, flower prints, and pink everything. We were ok with it, but we definitely didn’t enforce the “girl code”. Our daughter wore boats, alligators and monkeys just as much as she wore flowers, kitties, and roses. As she grew, so did her hair. She was born with quite a bit, and it never went away. Soon we were able to do ponytails, pigtails, and lots of other adorable styles. And then in Kindergarten, she decided she wanted to cut her hair a bit. And so we did. It was adorable, and went from super long to about shoulder length. Pretty much every year since then it has gotten shorter and shorter. Sometimes with an asymmetrical look, sometimes with a bob, and currently she is sporting a pixie cut. Every time she wants to get a hair cut, we talk about it for a bit, to make sure it is really what she wants, and then we schedule an appointment. They are always her ideas and her inspirations/looks that she decides on.

What is interesting to see is how others react to her haircut. Thankfully, we have a lot of really awesome people in our lives who are super supportive. They are always quick to compliment her on her new cuts. She has received only a handful of negative comments. But the negative comments strike a chord in me. Things like “wow- that is really short” or “but her hair was so pretty” to “but now you can’t do anything with it”. It is connected to what some view as a typical image of a young girl- what they are supposed to look like. But the reality is that people can look however they want, and they shouldn’t have to justify their look- no matter their gender or age.

As parents it is our job to foster growth, and encourage our kids to be who they want to be- from their hair to their clothes, to their interests and their life choices. When our daughter got her latest pixie cut, there was a woman in the salon who said she wished her daughter would be brave enough to cut her hair. She said her daughter was scared of cutting it, but yet hated brushing it or doing anything with it in the morning. Give them courage. Give them support. SHOW them examples outside of the norm. Diversity is beautiful.