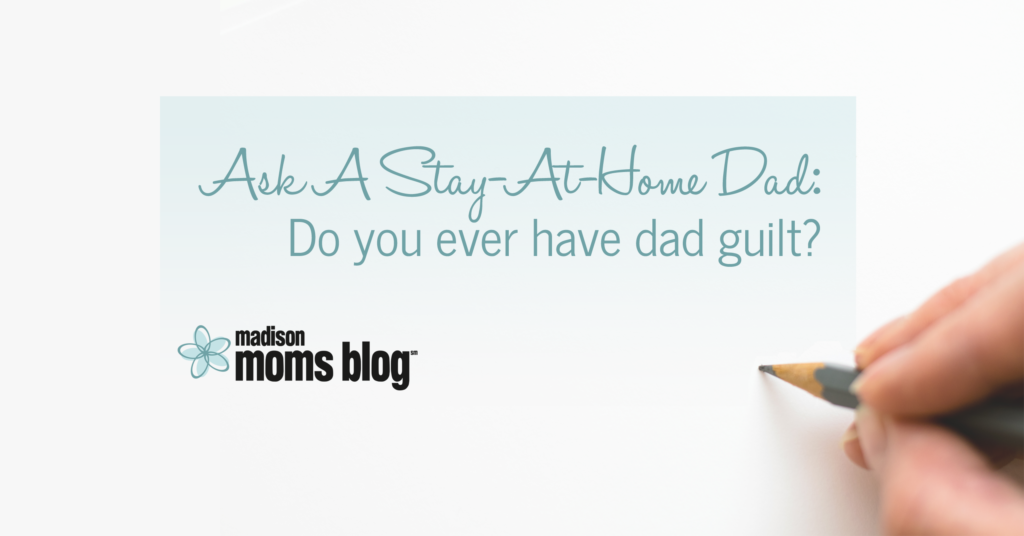 When I joined the Madison Mom’s Blog writing community, I wanted to ensure my blog posts were relevant for all of you. So I asked my fellow MMB contributors what they would like to read about from a stay-at-home dad’s perspective. They provided me with some awesome questions, and I plan to answer them over the next few months. But I would like to open this up to all of you for future questions or topics. Nothing is off limits, and I promise to give you an honest answer.

Here’s today’s question in its entirety:

I read a book years ago that dealt with moms and guilt. In the book the author said she could not find info on dad guilt. When I tried to Google it all I found was about absent dads who felt guilty for not raising their kids. I know many moms (myself included) who feel guilty over simply bringing the “wrong” snack to school. Do you ever feel this same type of guilt?

I feel like I second guess most parenting decisions I make. Was I too harsh on him just a minute ago? Was I too lenient? Should I just let that go? Or do I need to step in and say something for fear that this will become an issue in the future and I’ll have to work like mad to get him to stop doing whatever he was doing, or maybe it’s not a big deal and I should just let it go?? Whew… I’m exhausted from just typing that sentence.

Ugh!! What to do about preschool

And don’t even get me started about preschool. Until we had our second child, it was hard to justify sending my oldest to preschool. We aren’t yet (he’ll be 3 in September). But it seems like everyone else I know is going to be doing it. They usually spout the same things: I want (fill in the name) to learn how to interact with other kids their own age. I want them to learn things I can’t teach them. I want them to get ahead. UGH!!!

Well, so do I. I mean, I don’t want to stunt his mental and emotional growth. But isn’t that why I chose to stay at home? To give him the individual attention he wouldn’t get elsewhere? Plus, neither my wife nor I went to preschool this early (or at all), and we both turned out more than fine. But there’s always this nagging fear that you’re doing the wrong thing.

Updated: Since writing this post, we have decided to enroll our son in preschool. It became clear to me that he was bored staying at home with me ever since our second child was born. So rather than feeling guilty about not giving him the opportunity to socialize more frequently, we decided to enroll him in school part time.

So, yes, I definitely suffer from what I think we should just call parental guilt. Yes, it seems like moms typically suffer from guilt more than dads may, but I know that this is not exclusively a mom thing. I imagine it falls on whoever the primary caretaker is for the children, since they are the ones who tend to make the most decisions about what happens with their kids.

When the voices get to be too loud, or too frequent, I try to focus on at least one area that I know I am doing an awesome job as a parent. Then I remind myself that I’m doing my best with the rest of it. I find when I do this, I can be a lot easier on myself. What do you do to quiet the parental guilt?

Do you have any questions or things you have always wanted to ask a stay at home dad, or just a dad/male in general? If so, leave a comment below and I will answer it in the near future.