Before becoming a parent, there are certain things you say you’ll never do. And then you become a parent. You realize that the judgment that you had for those parents in the grocery store turn to a realization that things are much harder than you imagined. Very often I have said to myself and others, “never say never,” because of the frequency of these revelations. However, while I have learned many things the hard way in my parenting journey, there  are a few things that I have continued to hold on to in the “never” category.

Bribery, for example. I’m not a fan of it in parenting (well, in anything actually). I don’t like to tell my kids “if you do this, then I’ll give you that.” I’ve witnessed rewards/bribes the most in sports. And I will admit, I have been judgmental about it. Parents promising a dollar for every goal scored in the soccer game. An ice cream cone if you make a hit in baseball. I’ve never understood those kinds of deals.

And then, yesterday, I bribed my child. I didn’t mean to do it and the words came swiftly out of my mouth before I realized it. And it wasn’t a small, inconsequential bribe. It was a doozy.

Two summers ago near the end of the summer, my youngest, Henry, took a good scrape off of his nose jumping off of the diving board when he was five. He knew how to swim, had gone off the diving board many times that summer and had decided he wanted to do a “trick.” 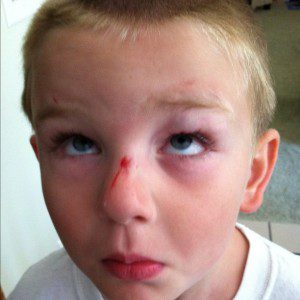 That trick cost him (it could have been worse) and he was not interested in getting back on that board the rest of the summer. I let it go.

Last year when he was six I went between encouraging him to get back on it and ignoring it. After all, he certainly enjoyed the pool without going off the diving board. He’d go back to it when he was ready. By the end of the summer he was no closer to going near that diving board. Again, I let it go.

Unfortunately, I believe that his continued avoidance of the diving board is affecting his enjoyment of the pool this year. It has become a hot attraction for the 7 year old set. I see him sadly watching, something holding him back.  The lingering fear is on his face and it is painful to witness. I have tried to encourage him, talk about his fear, and yes, even offered him a small “reward” of an ice cream if he just went off it once (bending slightly my no-bribery rule).  No dice. His older brothers have encouraged him, we talked about how he got hurt and how it wouldn’t happen again, and he would get as close as going up the stairs to the diving board….only to turn around quickly. The fear had now gotten to the point in which it is affecting his fun at the pool and has become bigger and bigger in his mind.

Yesterday we had family come in from out of town to visit us at the pool. We spent the day grilling out and catching up while my boys played in the pool with their cousins. As the afternoon went on, the cousins made the diving well their main hang out. Henry hung back. They asked him to join them. He declined. And then, it flew out of my mouth, “Henry, go off the diving board and I’ll buy you a Wii game.” Don’t ask me what made me say it. Maybe because it was SO outrageous, I was sure that he would still turn it down. Or maybe it was the margarita that I was holding in my Solo cup. No matter what made me say it, I was very sure that he would still refuse.

He was off the diving board in less than a minute.

And then, “Mom, when do we get my game?” Sigh. What have I done? I broke my cardinal rule AND Wii games aren’t cheap. 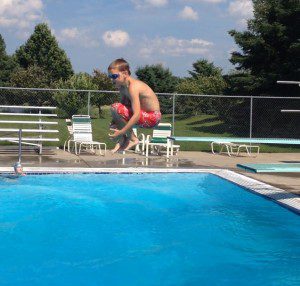 Go ahead and judge.

I don’t think I’m that sorry after all.