Hey, friendly reminder for all of us, including me … Don’t assign people a gender if you don’t know them. I guess due to her short hair and choice of dress (or maybe loving chickens is typically a male thing?!), MJ’s been called him, he, young man, and “your son”. MJ doesn’t seem to mind, but it’s still not okay …

MJ is my 12-year-old daughter who loves chickens, guitar pickin’, playing outside and just being a total goofball. She’s not fond of pink. 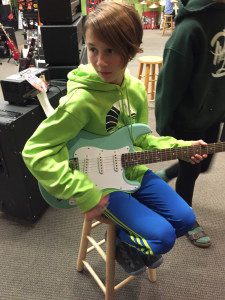 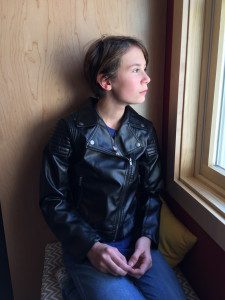 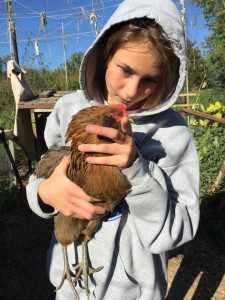 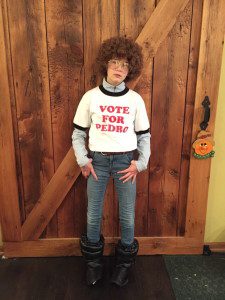 That FB post struck a chord: 89 likes, 40 comments. People sympathized and shared their own stories of being mis-gendered as children. Most said it didn’t bother them. However, many gave a detailed account of when that happened, how they felt, even what they were wearing …

I vividly remember in middle school I was at the roller skating rink and asked for skates and the worker brought me black ones… I had a short Dorothy Hamill haircut and obviously puberty hadn’t hit yet… I was mortified! I said, “Can I have white skates please?” and he did a double take and said, “Oh, sorry!”

Yep. It happened to me until age 15, too. Didn’t help that I wore my hair shortish/boyish/punkish and didn’t dress like a girl … whatever that means. I hated it. I probably looked like I didn’t care though. But I hated it every time.

One mom talked about people mis-gendering her son:

It hurts his feelings. It’s all about his long hair. He loves his hair, absolutely loves it. And he thinks it makes him look tough like so many football players he loves with long hair. So I think it bums him out that others read it differently.

Having someone else declare/take away your identity is a real bummer.

But, hey, if you’ve mis-gendered a kid, you’re not a bad person! I’ve done it on many occasions and only became hyper aware when a wonderful gender-creative kid in my yoga class showed me another way. Much love to you, kiddo …

“Certainly, it can take some getting used to because gendered language is so ubiquitous in our culture, but it just takes practice,” said a dear friend of mine who works with gender-creative children. “I think the key is just learning alternatives to gendered language.” Instead of ladies or guys or girls or gals or dudes, etc., use you all, y’all, folks, people or everyone. Use the child’s name or, if the child declares their gender, use the requested pronoun.

What’s not so simple is being a gender-creative kid, or a kid struggling with gender identity, in a culture full of not just gendered language, but inequity and shame and even hatred. For those children, mis-gendering is way more than just a bummer.

“Avoiding gendering EVERYONE is critical, but especially trans and gender non-conforming children,” my friend said. “Misgendering invalidates people’s identities, and is a harsh reminder that the world does not see them as who they are.” The less open and accepting we are to gender variation, the more rigid we are about labeling kids as boys or girls, the more we may ignore serious consequences of society’s insistence on binary gendering.

This past fall, a transgender high school student in Madison committed suicide. His mother vowed to fight for equality for transgender youth. We hold that child in our hearts, as well as the many, many other children struggling and in pain. National statistics on suicide in gender-variant populations of children are so very alarming.*

We can stand in solidarity with these children and their parents.

Wisconsin recently revised a bill to allow gender-neutral bathrooms in public schools. The debate around the issue was disheartening, to say the least, and the bill is opposed by gay-rights and transgender advocates, as well as public school advocates. But the issue was brought to the forefront and mobilized activists, who need our support.

A recent local story is more encouraging, a shining example of how to be compassionate and inclusive. This fall, Mt. Horeb school officials offered to read a book to the class of a transgender girl in order to educate students and make the child feel welcome. A Florida-based conservative group threatened to sue the school, so they cancelled the reading. Instead, hundreds of community members filled the Mt. Horeb library for a public reading of the book and to support the young girl and her family.

As the girl’s parents said, “In the midst of all of the media attention that this important matter has stirred up, we just want everyone to remember that at the center of this is a brave little girl who can now be who she really is. And you have all helped to make that happen in a positive way for her and her family. For that, we are, and always will be, truly thankful.”

I’m grateful MJ is pretty chill when a restaurant server calls her “young man”, but it was another wake-up call for me. Let’s make all children feel safe and welcome and give them freedom to be their beautiful selves, however they might define that.

More Information on Kids and Gender

Books:
Gender Born, Gender Made: Raising Healthy Gender Non-conforming Children by Diane Ehrensaft
The Transgender Child: A Handbook for Families and Professionals by Stephanie Brill
I Am Jazz by Jessica Herthel (read at the Mt. Horeb library)