Before the arrival of our second son, a short sixteen months after taking his brother home, I worried a lot about how I would manage having a newborn and a toddler who had recently learned how to walk. I remembered being stuck under my firstborn for what seemed like hours on end nursing. While doing this I shamelessly watched a lot of amazing reality TV, and was grateful for the summer Olympics that for two full weeks provided endless entertainment, especially in the middle of the night during feedings. I was the only person I knew who was watching events live at 4 o’clock in the morning. This made me feel slightly cool even though I was actually a zombie who had formed a dependency on my nipple balm.

The point is, for the most part, I had life under control. What would this next post-partum period be like without kicking back with my nursing pillow on and getting lost in the The Real Housewives of New York’s constant feuding or unsuccessfully holding back tears during the Olympic athletes’ story profiles?

It was going to be scary.

My husband was fortunate enough to get two weeks of paid parental leave (which, may I add, is two more weeks than I got from my job when our first was born. Out of my body. But I digress). Since our second baby arrived the day before Christmas Eve, he essentially got three weeks off as he had already taken vacation time for the holiday week. This baby had perfect timing to postpone my first day alone with him and his brother. That day eventually came, of course, and I was terrified. I got through it, and now I don’t even remember it. In reality, the first month or so of being alone with the babies wasn’t too bad because our newborn was in the stage where he would sleep at any time, any place. Even with his brother screaming and banging things within inches of him, he’d stay in a deep slumber. Around the two-month mark this changed. My newborn wasn’t content sleeping in the middle of the floor anymore and my toddler was exercising his will more strongly and frequently than ever before. Just when I thought I was getting used to the rhythm of having two under two, it suddenly became much harder.

My mother in law, who is basically my own personal Wonder Woman, had already been coming every Wednesday to help. She started coming on Tuesdays. And her sister, my husband’s aunt, began coming over for a couple of hours every Monday morning to keep the toddler entertained until his nap time, at which point she hands him off to me and holds the infant. This is the most challenging transition of each day, so I’m happy to have her there. My firstborn continues to go to his old in-home daycare one day a week, mainly because I’m super boring compared to all his little buddies, but also because he loves his provider. It gives me some good quality time alone with our second little guy.

But why can’t I do this by myself?

You’d think I would experience pure gratitude to have this kind of support. Instead that gratitude is diluted with feelings of guilt. And inadequacy. “Why can’t I do this all on my own?” I often ask myself. “Do they think I am failing at motherhood and are swooping in to save me?” is another question that runs through my paranoid mind. That day when my toddler is in daycare each week? It feels like a day at the spa right now. And, you guessed it, I feel guilty about it.

The notion that I may be inconveniencing those who are helping us haunts me all the time. Whenever my husband goes out of town, I barely have to ask my sister and her family or my parents whether they’d want to come up to Madison from Chicago. I love having them here, especially my 12-year-old niece who has a special bond with my firstborn. But there’s this underlying current of the same guilt and inadequacy that I just can’t shake the whole time they are visiting and helping out. I hate it. 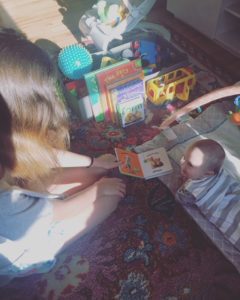 I am lucky that because I have so much support, my sons are able to feel a ton of love from other people besides my husband and me. I know that these same people wouldn’t offer to help if they truly didn’t want to, and sometimes I can’t believe my good fortune to have them all in our lives. I realize that they also feel lucky to watch my toddler grow, learn and run around, and to get those infant cuddles in even with all the chaos going on in the background.

So what’s my problem?

For now, I will try harder to take a deep breath and accept the help offered to me with a purely grateful heart. As much as I resist admitting I need help, having it makes me a happier and less stressed out parent, and that is the greatest gift not only to myself but to my sons. I’ll attempt to let go of the “Mom Guilt.” It doesn’t make our already incredibly hard jobs any easier to carry that sort of emotional weight around. I am trying my best. Some days are better than others. I’d probably be a silver medalist if this were my Olympic sport. I definitely have way less drama in my home than those other Real Housewives do. I still feel like a zombie though.