When kids are very small they typically spend a lot of time acting silly. We see it as a good thing, a marker of a happy child. We laugh when they make silly faces, giggle as they screech while chasing around their friends, and love telling them just how silly they are. Then one day the shift happens.

I’m not sure when the change comes, but I’m fairly certain it happens at far too early of an age. The moment when all of a sudden being called silly means something negative. It becomes a quality to be avoided. A word that heard when picking up your child from school or at parent/teacher conferences makes your shoulders sag. It’s presence is no longer welcome as you try to capture a photo or get dinner on the table. I would know, I’ve been that parent. 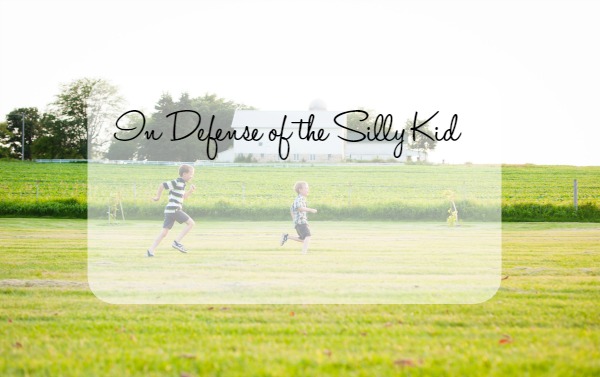 I would not consider myself to have been a particularly silly kid. I was always on the more serious side growing up and my oldest certainly has that same personality trait. I will admit that it has been a challenge for me to understand and accept that some of my kids just have a more silly personality. Don’t get me wrong, I am in no way condoning acting disrespectful or rude, but I have learned that for some kids being silly is just how they are, at least for now. They have no interest in fitting inside of the box we as adults have put them in.

We ask a lot of young kids these days. Academic achievements and competitive sports are valued at a much younger age than I remember. Parents, grandparents, and friends want to photo document all major milestones and every moment in between, and we want these memories to appear put together and without the constant use of bunny ears thank you very much. We want them to be on so much. We think that silly can come later, maybe, when there is time, after all of the homework is done, and the activities are over, and dinner is eaten, but not too close to bedtime. It’s got to be tough.

I am here to reclaim silly as a positive adjective. So, to the kids out on the soccer field doing more dancing than playing. the one’s peppering dinner conversations with knock-knock jokes, to those who take photos with their tongues out more than in, I want you to know that I think your’re awesome. This world needs more reasons to smile anyway.