Not everything has to be “12 Years A Slave”.

I mean, yes, by all means watch that movie. After all, it won the Best Picture Oscar as, according to Rotten Tomatoes, an “unflinchingly brutal look at American slavery is also brilliant — and quite possibly essential — cinema.”

But as the current burst of anti-racism energy transitions into the long-term work of defeating racism, it’s worth noting that not all anti-racism actions have to be grave or laborious.

Some are heavy and dark, alá “12 Years A Slave,” and challenge us to witness, acknowledge and evaluate the systemic racism that has marked the entire history of the United States.

But some are light and funny, or intense and melodramatic.

One of the greatest challenges to dismantling racism are the race-based bubbles we live in, unofficial segregation that keeps us from knowing people from other races on a human-to-human basis.

Netflix can’t do that work for us. But watching movies and TV shows that depict ordinary life as experienced by black people, we do, in a real way, start to understand our common humanity. We’re less likely to rely on racial stereotypes to judge others. And we pass those lessons onto our kids.

This isn’t an exclusive list. Most I haven’t even seen myself, because I also need to diversify my media consumption.

These are well-reviewed, but we welcome additional suggestions in the comments. 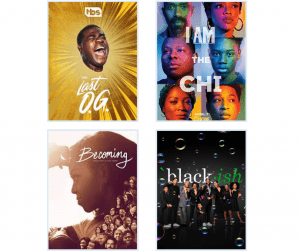 The Last O.G. (TBS, Hulu with Live TV): “Tray (Tracy Morgan) is an ex-con who is shocked to see just how much the world has changed when he is released from prison for good behavior after a 15-year stint. Returning to his newly gentrified Brooklyn neighborhood, he discovers that his former girlfriend, Shay (Tiffany Haddish), has married an affable, successful white man (Ryan Gaul) who is helping raise the twins (Taylor Mosby and Dante Hoagland) Tray never knew existed. Wanting nothing more than to connect with his kids, but having neither the money to support them nor himself, Tray falls back on the skills he learned in prison to make ends meet while treading unfamiliar territory.”

The Chi (Showtime, Hulu with Showtime): “On Chicago’s south side, an average day finds kids prepping for school as their parents head off to work, young adults trying to make a living, and the elders keeping an eye on things from their front porches. But in this tough neighborhood, real dangers threaten daily to squelch dreams, and the simplest decisions can have life or death consequences.”

Becoming (Netflix): Based on her bestseller memoir, “Join former first lady Michelle Obama in an intimate documentary looking at her life, hopes and connection with others.”

black-ish/grown-ish/mixed-ish (ABC and Freeform, Hulu): These sitcoms — the original black-ish and its two spin-offs — follow one black family trying to maintain their culture identity while living in suburbia or, in the case of grown-ish, at college. 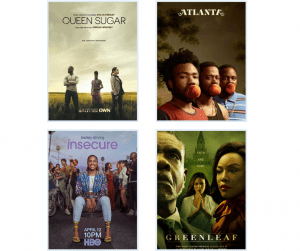 Atlanta (FX, Hulu): “Two cousins work through the Atlanta music scene in order to better their lives and the lives of their families.”

Insecure (Amazon Prime with HBO subscription):  “Created by and starring Issa Rae, this comedy series looks at the friendship of two modern-day black women, as well as all of their uncomfortable experiences and racy tribulations. As they navigate the tricky professional and personal terrain of Los Angeles, best friends Issa (Rae) and Molly (Yvonne Orji) face the challenge of being black women who defy all stereotypes.”

Greenleaf (Netflix): “Although members of the Greenleaf family run a Memphis megachurch, their business and personal lives are tainted with greed, adultery and other sins.” 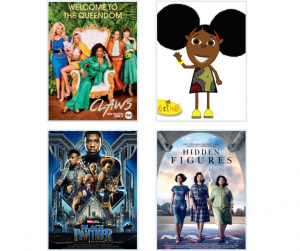 Claws (TNT, Hulu): “Claws is a midnight-dark, wickedly funny meditation on female badness set in a South Florida nail salon. It follows the rise of five diverse and treacherous manicurists working at the Nail Artisan of Manatee County salon, where there is a lot more going on than silk wraps and pedicures. Claws is about good women caught in bad places with worse men. It’s the story of hardworking women trying to get by in this economy, set against the surreal, bright, gritty landscape of Florida and the luscious, absurd, extreme excesses of the crime world.”

Bino and Fino (kids program, Amazon Prime):  Follow the adventures of Bino and Fino from Nigeria, as each day brings something new for them to learn. It could be an African dish, an animal, a country, a word in an African language, a musical instrument, African geography or folktale.”

Black Panther (Disney+): “This Marvel Studios movie follows T’Challa who, after the death of his father, the King of Wakanda, returns home to the isolated, technologically advanced African nation to succeed to the throne and take his rightful place as king. But when a powerful old enemy reappears, T’Challa’s mettle as king — and Black Panther — is tested when he is drawn into a formidable conflict that puts the fate of Wakanda and the entire world at risk.”

Hidden Figures (on Hulu with Live TV; for rent on Amazon Prime video): “Hidden Figures tells the incredible untold story of Katherine Jonson (Taraji P. Henson), Dorothy Vaughan (Octavia Spencer) and Mary Jackson (Janelle Monae) – brilliant African-American women working at NASA who served as the brains behind the launch into orbit of astronaut John Glenn, a stunning achievement that turned around the Space Race. The visionary trio crossed all gender and racial line and inspired generations.” 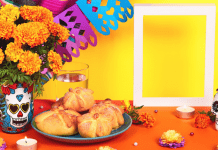 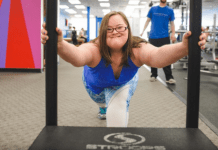 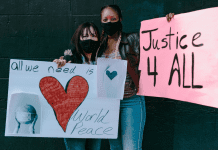