It was mere days into our journey as new parents to our twin boys that I realized my partner is indispensable. We have all heard that the instances of divorce are notably higher amongst couples with multiple children, such as twins, triplets, or more, because of the incredible added strain of caring for multiple children. Those early months were a haze of sleeping a maximum of two hours at a time, (sometimes successfully) nursing, pumping, mixing large amounts of formula, changing countless diapers, attacking piles of laundry, and just trying to get through the days and nights.

There was no way I could have done that alone. I can’t imagine having been more exhausted or teetering more precariously on the edge of sanity. I know there are single parents out there who don’t have a choice, and I commend them. I commend the heck out of them. People often say to me, “I don’t know how you do it.” I don’t know how people with more children or children with special needs or single parents do it! And of course, when it comes right down to it, you just do what has to be done. You keep the boat, and your head, afloat for the sake of the passengers.

I chose to make an extra effort to keep our relationship fresh, strong, and high on our priority list. I choose it every day, although it’s not always something I give a great amount of thought to. We are aware of the fact that with a little more effort on their part, our children could totally divide and conquer us as parents. And because we’re both stubborn people and don’t like to lose, we refuse to let them. United we stand, and divided it all falls to pieces.

I believe in showing a united front to your children, even if you and your partner don’t quite agree 100% on a stance. There have been a few times recently when I have heard my husband explain something to or discipline our children. Rather than disagree with him right then and there, I bit my tongue (literally, because I do that, and figuratively) and waited until after the children were out of earshot to bring up my point of view and start a discussion. How much of an adult am I?!

My parents taught me early on that they are one parenting unit. They swiftly shut down any notions I briefly entertained that I might receive a more favorable answer from one or the other. I remember that lesson decades later, and it’s one of the lessons I want my children to learn. 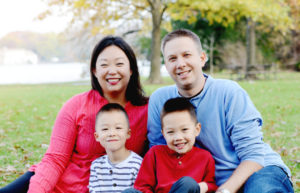 My husband and I have a lot of different beliefs. We’re far from the exact same person, so naturally we don’t see eye to eye on everything. For example, I happen to believe Hozier is one of the most talented singer/musicians out there. My husband believes the same about Chris Cornell. His (my husband’s, not Cornell’s as far as I know) favorite ice cream flavor is vanilla, while I won’t give the time of day to something that isn’t at least partly chocolate.

He believes in strict punctuality, while I believe that someone pacing behind me and asking me non-urgent questions while I try to put on eyeliner is NOT a helpful way of getting me out the door any sooner. He believes in owning as little footwear as possible. I believe that after I clean the bathroom sink, it should remain that way for quite some time. He is a passionate football fan, and I constantly forget the difference between a linebacker and a wide receiver. I believe in making my own Alfredo sauce. I don’t even know what the jarred stuff tastes like.

We agree to disagree and keep the trash talk to a minimum. Fortunately, for bigger issues such as religion, politics, and the grand scheme of things in this world and life, we’re pretty well-partnered. And we try to make sure our young, impressionable children know it.

When they’re older and more educated, I hope they form their own opinions and, what’s more, can effectively argue their reasoning and defend their decision-making. And maybe then we’ll show a few of the chinks in the parental armor, the issues their parents don’t whole-heartedly agree on. Maybe then we can discuss all of our differing points of view, respectfully and with open minds. I look forward to it. Maybe they’ll be able to teach me the difference between a linebacker and a wide receiver, and maybe it will stick.