My husband suggested letting my son, who is now 2 ½, cry-it-out when he was around 4 months old. However, I just couldn’t do it. I could not imagine leaving my sweet boy – the one we tried so hard to have – lay there and cry. I wasn’t against sleep training in general. However, that particular method wasn’t something that felt right for us me at the time.

Around the same time, I read a story on Facebook about an orphanage in Africa where a man walked into a nursery filled with babies and found the room completely quiet. He asked the woman who ran the place how it was possible that none of the babies were crying. The woman told him that after crying-it-out for countless hours, they all just eventually stopped. They realized no one was coming for them. Maybe ever. How sad is that?

There was no way I could do that to my child. No matter how hard it got. I wanted him to know we were always there for him. That, to me, was even more important than getting good sleep.

In all honesty, our child had been sleeping pretty well for a baby and I wasn’t entirely sure sleep training was necessary. I followed the Wonder Weeks app on my phone and knew when to anticipate a sleep regression. Each time the app predicted one, like clockwork, it began. And, inevitably, in the middle of it, my husband would come out of our son’s room one night leaving him wailing away in his crib and close the door and whisper to me, “Let’s just let him cry-it-out.” Each time I would reply, “I’m not okay with that.” Because again, it tugged at my new Mama heartstrings too hard to let him just cry-it-out. His tears meant he needed me. And he needed comfort. Not to be left alone crying for who knows how long, wondering if anyone would ever come for him.

Eventually, we’d make it out of the regression and my son would remember how to sleep through the night again. I assumed things would level out as he got a little older (naïve, I know). But, then we took him out of his in-home daycare when he turned 2 and enrolled him in preschool. The first week went well, even though it was a big transition. He loved his classroom and his teachers almost instantly. There were very little tears. In fact, the first day we dropped him off, he jumped out of my arms and went to play with some cars and we were able to sneak out quietly without much fuss.

Nevertheless, after about the second week of school, he started having trouble sleeping again. Bedtime, once more, became a battle. Most nights it would take more than an hour to get him down. Then he would wake up every single night, refusing to go back to sleep. More than once, the middle-of-the-night wake-up became a whole ordeal that went on for 2-3 hours.

His teacher told us it was normal for kids his age to regress in sleep during big transitions and that he would come out of it soon. A quick Google search confirmed that, and I also learned we should avoid any other big changes, like converting his crib to a “big boy bed” or potty training, until his sleeping patterns were back to “normal” too.

We tried hard to stick to a routine, which was tough since moving him to preschool was a big transition for us too. I had done drop-off and my husband picked-up with our old day-care provider. However, since he had recently started his own business and had increased flexibility with his schedule – we switched. As a result, drop off was a bit later than it used to be. And we got home an hour later every day as well.

Since we were often up for hours trying to get our son back to bed in the wee hours of the morning, most days, the boys were still sleeping by the time I left for work. I can’t help but wonder if that’s why he fights sleep tooth and nail every night. Because, he misses me. And sleep means he might not see me until after 5:00 p.m. the next day.

After nearly 2 months of exhaustion, I took my child to the doctor to see if there was something going on that might be affecting his sleep. We were desperate for a good night’s rest. His doctor told me she doubted it was a medical issue, but instead was probably behavioral. Evidently, it’s typical for toddlers his age to try to exercise some control. And he had learned that sleep (or lack thereof) was something he could control. Simply put – we were locked in a power struggle.

I told her we had tried everything – sound machines, humidifiers, essential oils, night lights. Earlier bedtimes. Later bedtimes. Nothing seemed to work. She gently reminded me that we had in fact NOT tried everything and that perhaps it was time to do the one thing I had been trying to avoid for nearly 2 years. “I think you just need to let him cry,” she said. She told me it would be hard, because he is smart and he is strong, and it would likely take three nights before he got the hang of it. At this point, letting him cry-it-out was necessary in order for all of us to (hopefully) finally get some rest.

That night, like some small miracle, our son slept through the night for the first time in 6 weeks. However, the next night it was not so easy. He protested when I left after story time and started yelling for me to come back in his room. I steeled myself to the crying, reminding myself that this was the last straw. After 2 minutes – I kid you not – my husband went in there. The man, who 4 months in, insisted we should let him cry-it-out, and I swear, blames me for every sleep issue we have had since because I couldn’t.

After he left his room 5 minutes later, our son cried for 12 minutes and then stopped and went to sleep.

The night after that, again, he protested. And again, my husband went in there after I put him to bed. After he gave up and left, our son cried for 7 minutes and that was that. It wasn’t as bad as I had thought it would be.

He got the hang of it after a few days, just as the doctor predicted, and bedtime started to go a bit more smoothly. Each night, he would lay down like a good boy after brushing his teeth and reading three stories. I would tuck him into bed and tell him good night and he’d give me permission to leave with a “Go tell my Dada.” He slept through the night many nights and on those that he did not, we were able to get him back to bed quickly and without much drama. 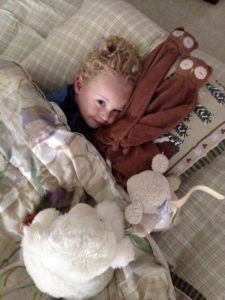 That lasted for about two months. And here we are, right back where we began.

Four nights in a row last week, we put our child down at his normal bedtime (8 p.m.), and two hours later, he was still in his crib chattering away. He’d eventually hit a wall and realize he was overtired. And then the screaming would begin. “Come tuck my in!” “Tuck my owls in!” “I need a Kleenex!” “I have an owie!” “I’m scared!” “I have poops!” Every trick in the book to try to get us to come back into his room.

We tried letting him cry-it-out again, and after a full hour one night, my husband went in there to try to calm him down. All that did was start the process over again. Another hour of yelling ensued, after which, I went in to see if I could get him to sleep. By 10:30 p.m., he finally tuckered out, laid down and went to bed. But, four hours later, he woke up and did it all over again.

I don’t know what happened or why, since we had made such good progress over the last couple of months. But for the past two weeks, every single night, bedtime has been a battle. And letting him cry-it-out doesn’t seem to be working. I often wonder if it would have even worked had we tried it back when he was four months old. While I can’t go back now, I am open to new ideas and strategies. Because this Mama is exhausted.

What has worked for you in the constant struggle for sleep?