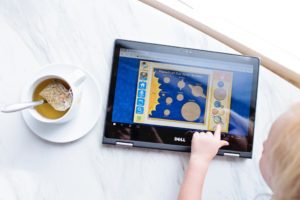 Screen time has been a hot topic among parents and scientists alike. Every parent deals with the internal struggle between what we think we will do as parents (pre-children), and what becomes a necessity when the realities of parenting meet up with the realities of our everyday life and work. For me, one of these battles is screen time.

I recently read the book iGen by Jean Twenge. I had read her book, Generation Me, a few years back and found it fascinating. Dr. Twenge is a psychologist that does generational research. She uses massive national data sets that have surveyed teens and adults for many decades, therefore she can compare how different generations responded to the same questions, at the same ages. She defines iGen as people who were born between 1995 and 2012, and I have been deeply troubled by the results. As teenagers, those in iGen are more likely to spend more time looking at screens and less time sleeping. They are more likely to be depressed and anxious and more likely to attempt suicide. They are also more likely to be overly reliant on their parents at ages when we would expect teens to be starting off on their own and gaining more autonomy.

Of course it would be unethical to conduct a true experimental study to test out the causes, but there are strong correlations to suggest that screen time, and specifically social media, are strongly related to some of these alarming trends. According to Dr. Twenge, teens who reported higher amounts of screen time also reported less time sleeping and less time actually hanging out with friends (in person). Higher amounts of screen time were also correlated with more anxiety and depression. Additionally, teens who physically spent time with their friends and/or played sports were more likely to sleep more (also correlated with lower depression and anxiety) and be less stressed. 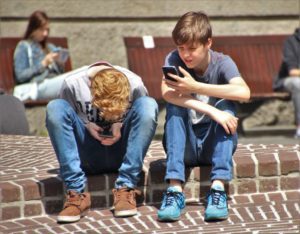 Psychologists have known for years that any addictive behavior (i.e. shopping, getting “liked” on social media, scoring points on a video game) releases dopamine (a feel-good chemical in our brains). So it isn’t surprising that teens can easily become so addicted to social media and video games that they literally sleep with their phones under their pillows (hello fire hazard!). However, controlling screen time is easier said than done. My kids are still young, so I’m still in that haze of feeling like I’ll have some control over them when they are teenagers, but I can do the best I can do now. So what can I do now?

We limit their screen time now, and encourage them to play with each other and by themselves. The American Academy of Pediatrics recommends that children under two old have no screen time. We stuck to this the best we could when our kids were under two years old. Did our kids never see a screen? No. Of course we went to restaurants that had TVs on in the background, or the kids got the flu and we let them watch a video so that they would lie down and rest, but we did do our best to not intentionally let them watch TV the vast majority of the time.

When they did start watching videos and playing small games, we kept it limited and tried to limit the amount of commercials they watched. When our son was around two years old we would let him watch some short videos off of YouTube. He actually thought that the movie Frozen was called “Let it Go” and only consisted of the three minute video clip of the song on YouTube until he was about three years old.

I also try to be a good model for them. Do I ever look at my phone when they are around? Sure, but I also make the effort to set it down and interact with them most of the time. Often times when I am on my phone, I’m reading articles or emails, so I show them that and ask if they have a book that they want to read. I do my best, but I’m also not going to beat myself up for scrolling through Facebook every now and then to relax and take my mind off of things.

I’m stricter with screen time than many of my friends, but we all do what works best for us and what we are able to do in this season of life. We each have our own struggles, and we each need to try different things to cope with where we are now. I’ve had my days when my kids get to watch the whole Moana movie in one sitting because I have a Skype meeting for work, and I don’t feel guilty about it. There are enough things to be upset about in this world, judging each other for every parenting choice isn’t needed. No one is perfect. We all need to pick our battles, but moderation is key for me.