Your name, while you had no choice in it, is something that you have lived with and will continue to live with the rest of your life.  Maybe you love the name you were given.  Maybe you hate it.  But do you know why you were given it?  Giving someone a name, especially when you haven’t even met them, is an important yet daunting task.

Until I was pregnant with my twins, I had never really given the idea of “naming” much thought.   In the beginning of my pregnancy, my husband and I, just for fun, had discussed some names we liked for both girls and boys.  At 20 weeks, we found out we were having twin girls, but we also learned of many complications.  So giving them names was last on our priority list when we weren’t even sure they were going to live.  After a surgery on my placenta and positive news from the doctors, my husband and I started seriously looking at names around 24-25 weeks.  At this point, we decided we wanted our miracle girls to have names with strong and significant meanings.  We started eliminating names we liked earlier because they lacked the meaning we were searching for.  We landed on “Eva”, which means “full of life” and “Abriella” which means “strong one of God”.  As I prayed for my unborn babies, I hoped that these names we had chosen for them would not only given them an identity, but would truly represent who they are and who they would become. 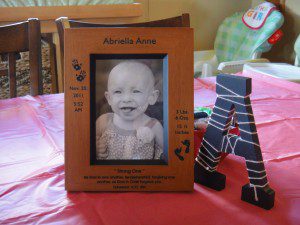 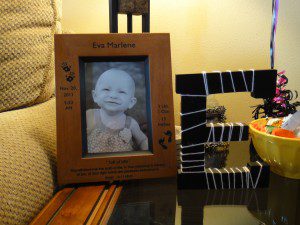 That is just our story.  I’m sure so many of you have your own stories.  Maybe you chose a family name or the name of someone that is or was close to you in order to honor that person, like the new royal baby, Prince George.  Maybe you chose a name that is important in your religion or faith.  Maybe you chose a name that starts with a certain letter because you want your children and your family to be united and connected through that letter.  I was named after the famous actress, Melissa Sue Anderson from “Little House on the Prairie”.  Maybe you, like my mom, liked the name of someone famous, and chose that for your child.  Maybe you waited to see your child before you gave them a name.  Maybe when you were little, you picked out a name that has stuck with you.  Or maybe you just REALLY liked the sound of a certain name because it was unique or special to you for some other reason.

No matter what reason or what name you have given your child(ren), you did it with intention and purpose.  Share your reasons with your child and help give them an identity, not only in their name, but also in who you hope for them to be as that person.

I would love to hear your stories!  Please comment below.