The Elf on the Shelf — parents either love ’em or hate ’em. I happen to love him! Last year was the first year that we welcomed an elf (lovingly named ‘Madison’) to our abode and the lil guy brought so much joy to my kids.

To help you out, I made a list of some of the things we did + some ‘easy’ ideas. I would love to hear some of your ideas as well!

If you don’t have an elf yet – there is still time. You can get one here; or if you want just the elf and not the book – this is a good option!

Insider tip: Plan ahead, I literally planned for all 25 days at once so that I never had to feel overwhelmed the night before. It didn’t take long to do so and made it super easy!

Special thanks to my friends who sent me photos of their elves to help me out! This year I will be better about taking pics of our little friend!

40 Creative Ideas for the Elf

Easy enough – situate your elf on the counter and spell out DID YOU MISS ME? with M&M’s (or Hershey Kisses or skittles or whatever candy you have).

Make a Rainbow with Skittles

My absolute FAVORITE (and this one made me feel crafty, even though I’m not!). Get out a plate, line the perimeter with skittles. Leave a note, telling the kids to ‘make a rainbow’ — simply pour some warm water in the middle of the plate and watch the magic happen! 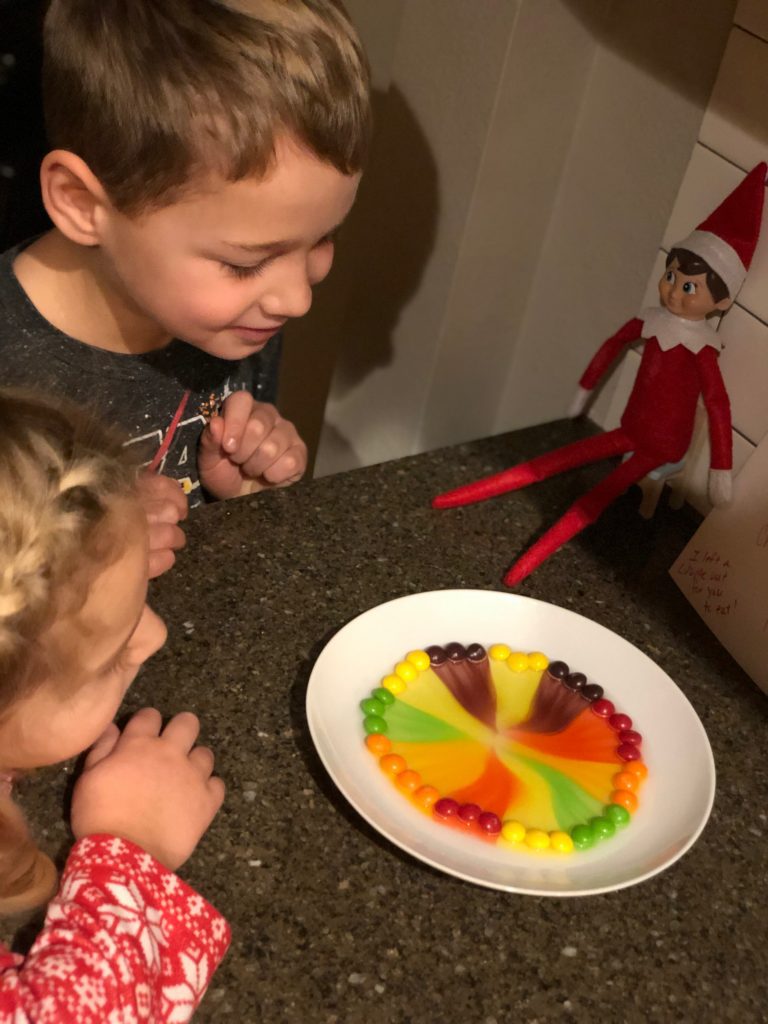 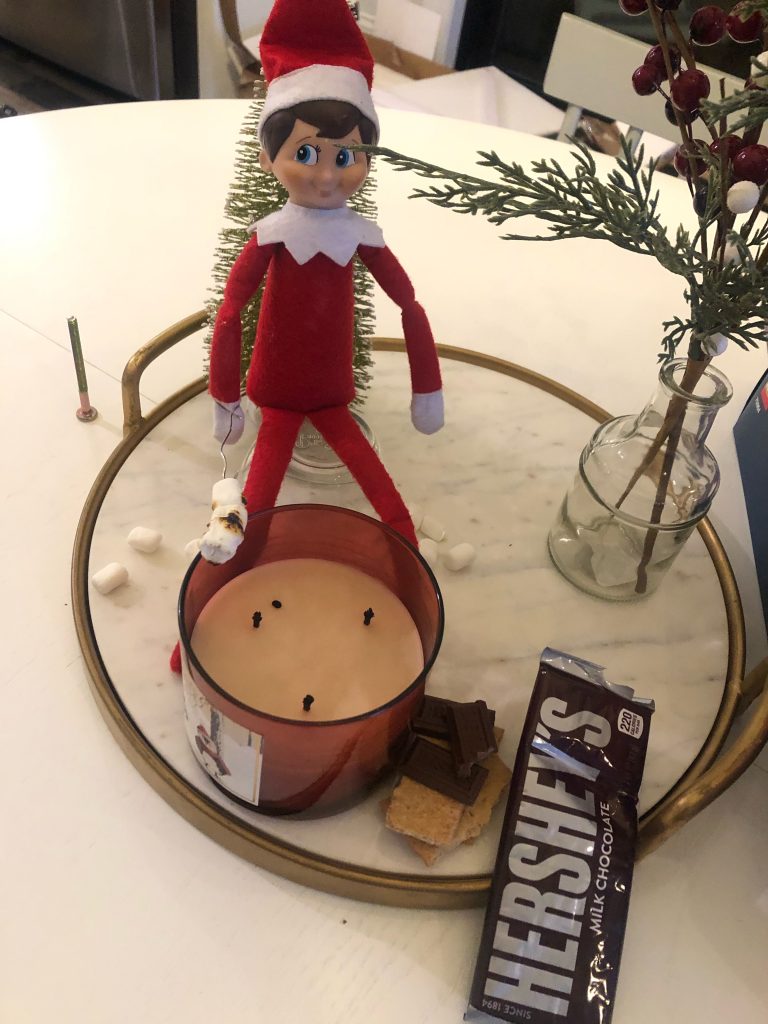 Getting into the Rice Krispies

When the Rice Krispies  are just about gone, have your elf pop through the box — and pour the remaining Rice Krispies into a bowl with chocolate chips and marshmallows. 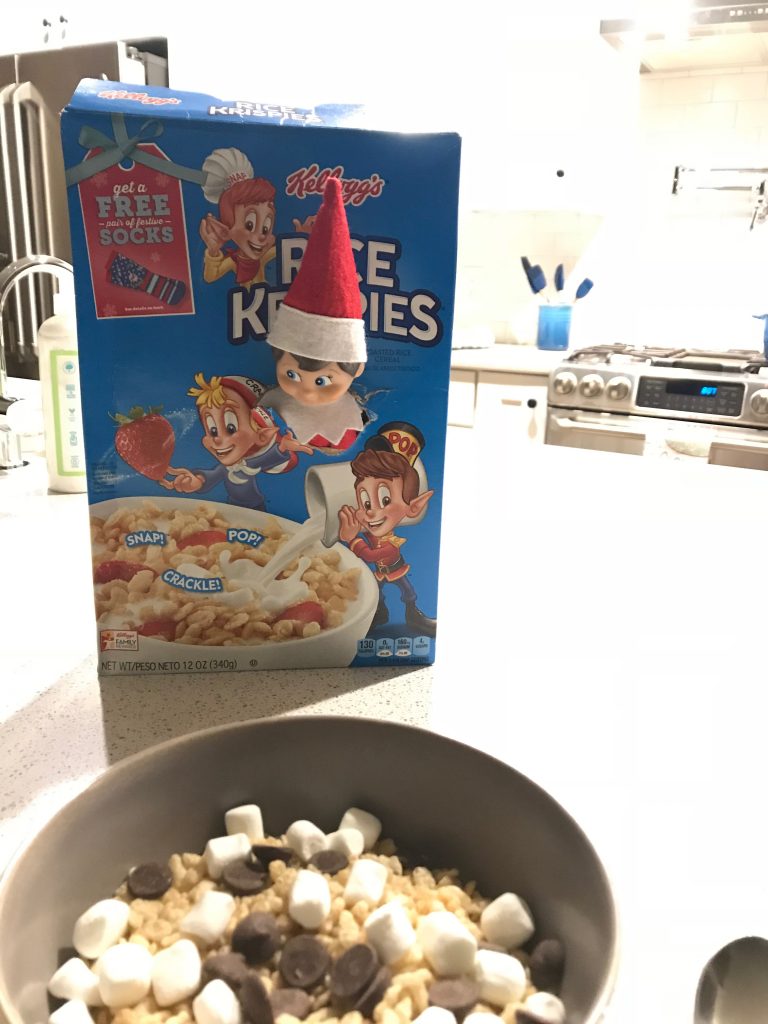 Is This How You Do the Floss?

Wrap him with some floss and leave a note asking ‘Is this how you do the floss??’ 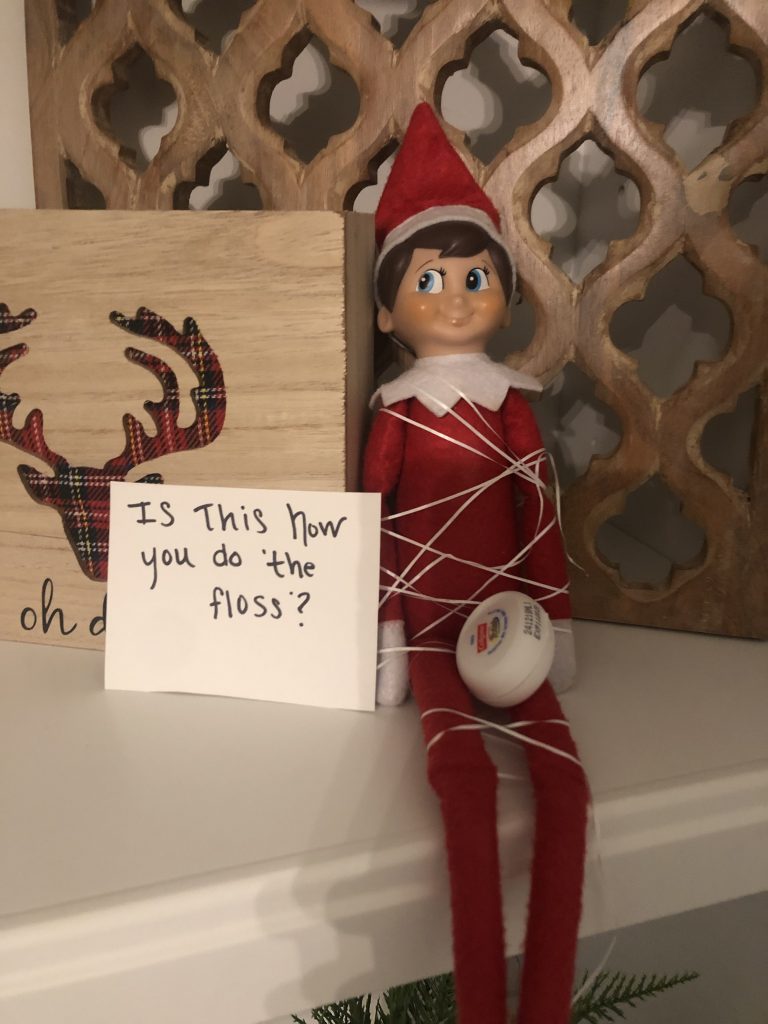 On Taco Tuesday, cut a hole in a tortilla (for your elf’s face) and wrap your elf up like a burrito! Leave a note saying ‘It’s Taco Tuesday!’ 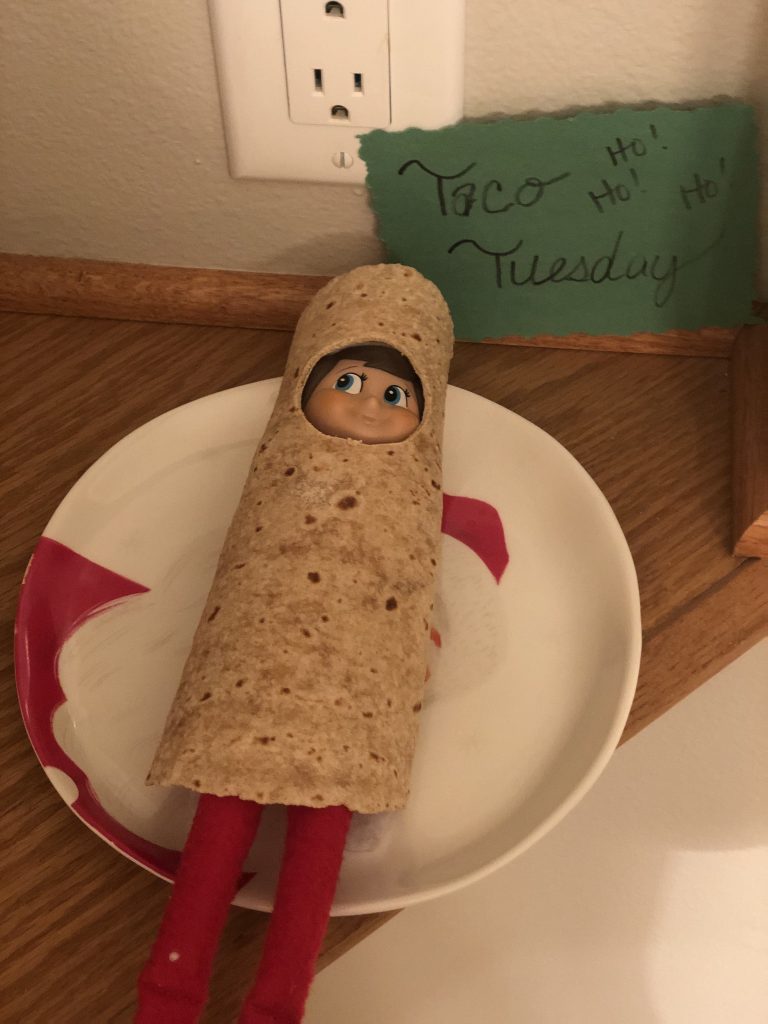 Turn a candy cane or straw into a fishing pole (with a little string) and put goldfish in the sink (or a bowl) and see if he can catch any fish! 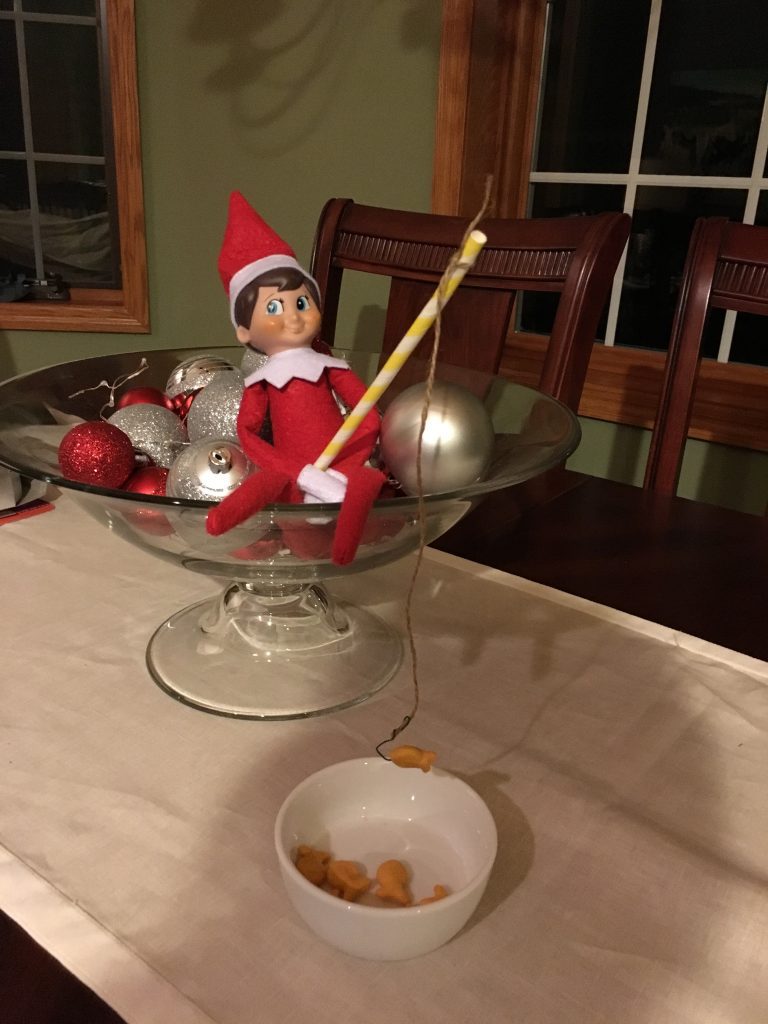 With some paper – make a cheesehead and a GB Packers sign (attach to a straw and put in the elf’s hands). 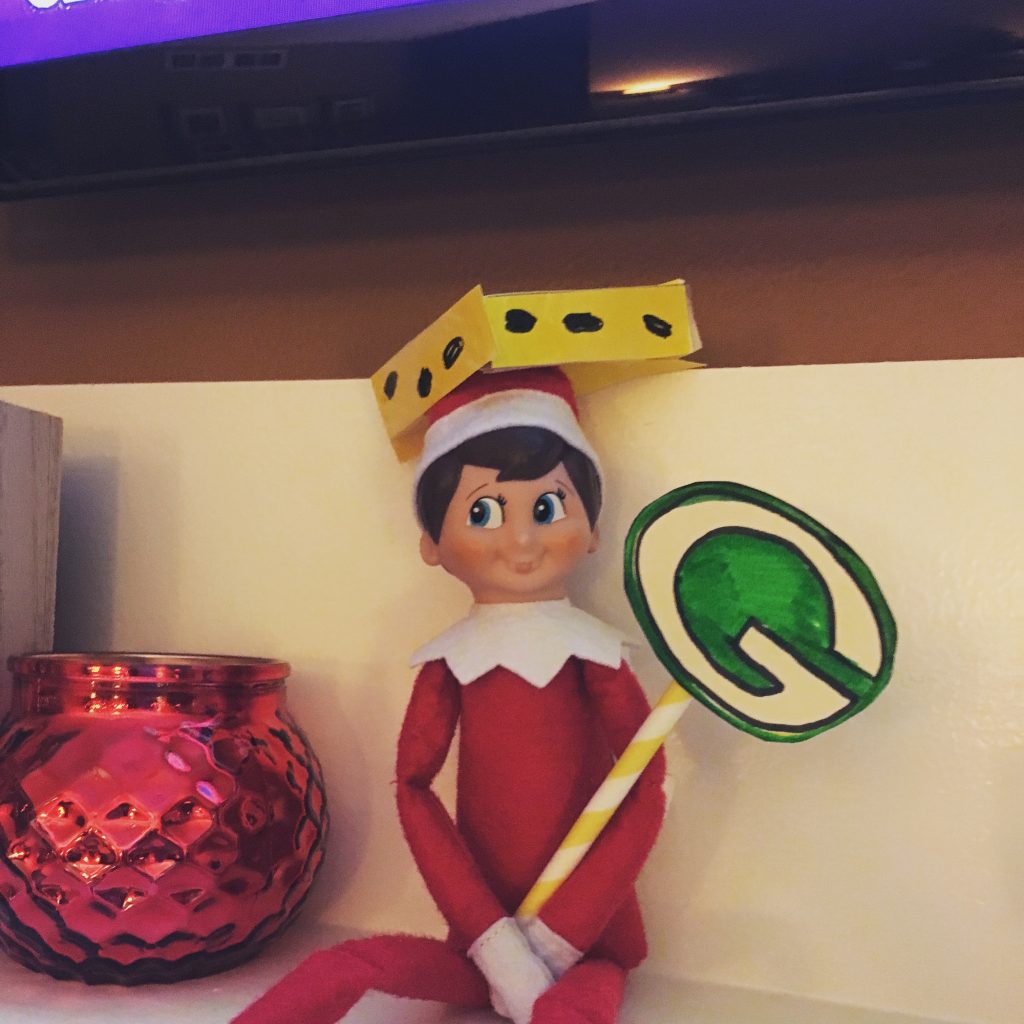 Grab some TP and wrap it around the Christmas tree!

Grab a water bottle and a stuffie and have your elf do some stretches — for extra fun, print off a sheet that says ‘Holiday Elf-ercise.’ 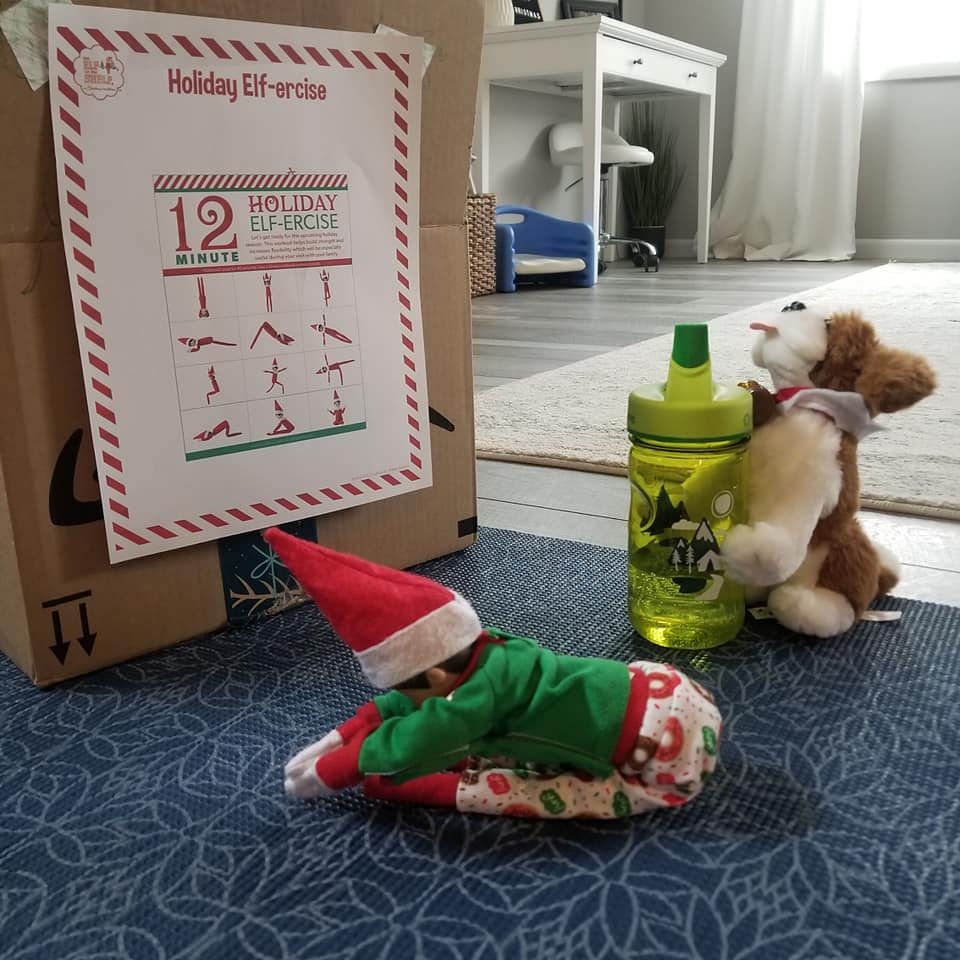 Fill a bowl (or sink) with marshmallows and have the elf hop in! 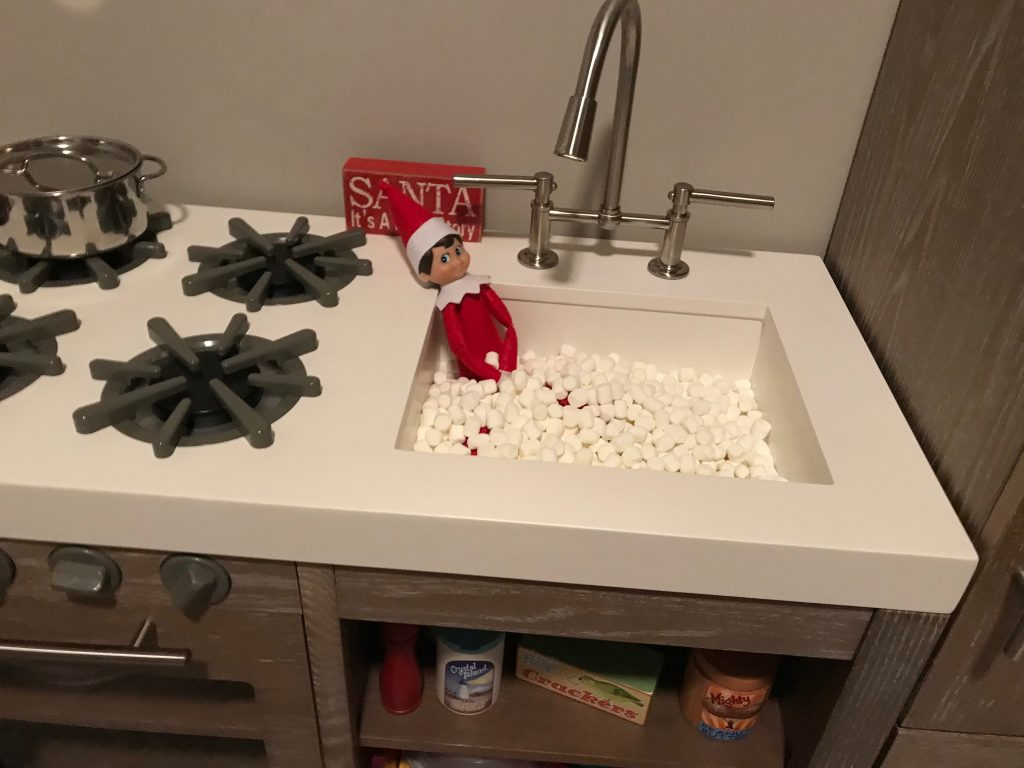 Make a paper airplane and put the elf on it – have it land on the tree and write ‘oops’ on the airplane! 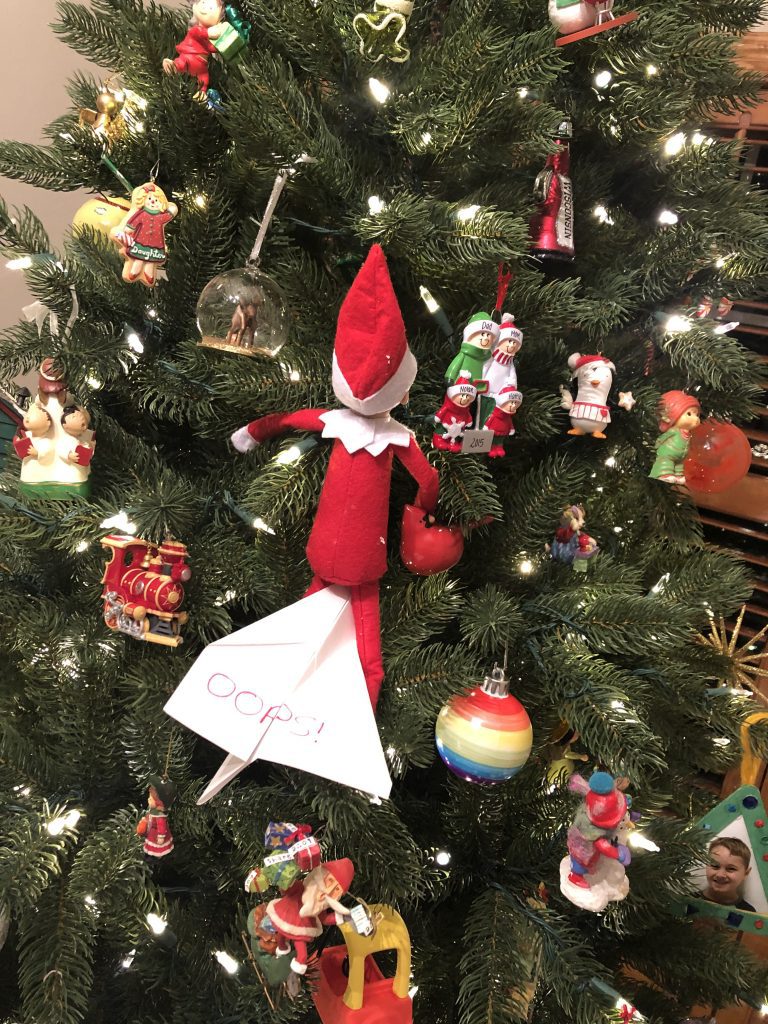 Wrap him in aluminum foil and hang him from a light or ceiling fan. For extra fun, hang a couple stars or moon. 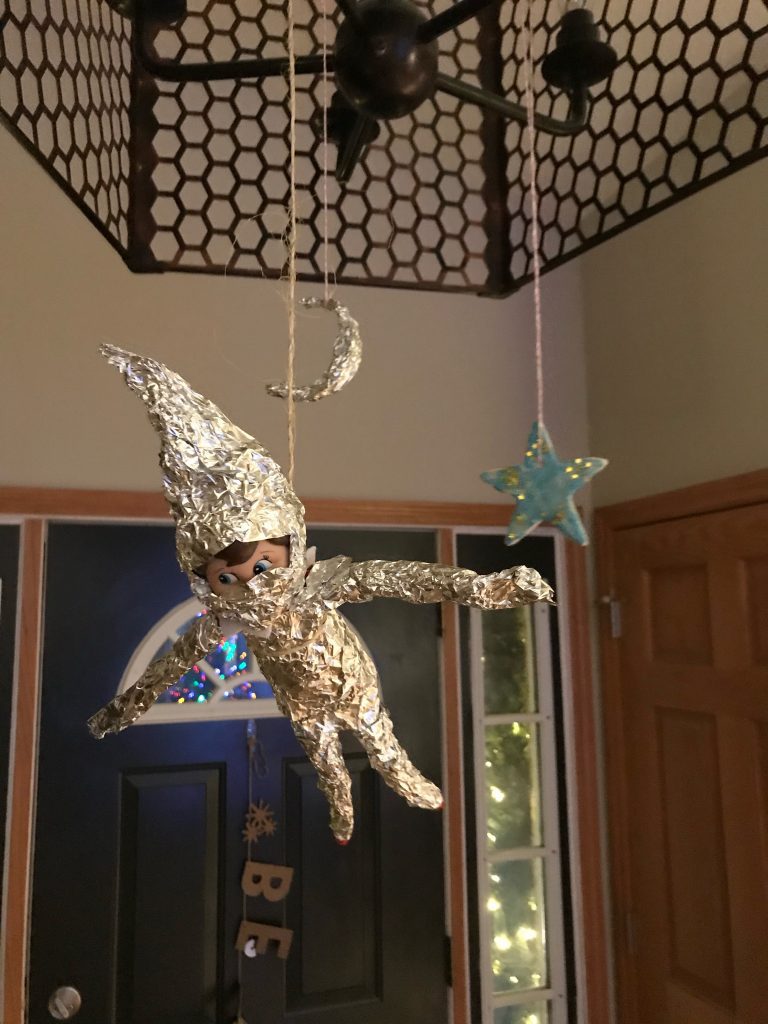 Grab 3 rolls of TP – stack 2 of them and put the elf in the tube; write PEEK A BOO and then put the 3rd roll over his hat, so only his face is peeking out. 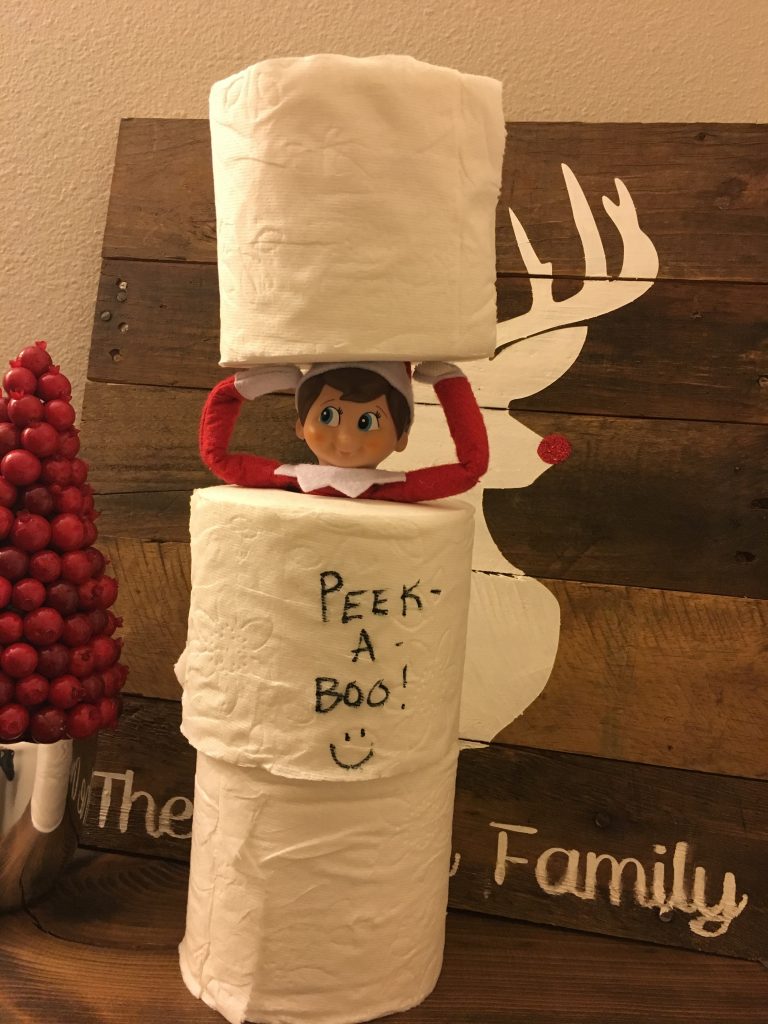 Do You Wanna Build a Snowman?

Grab 3 rolls of TP and stack them… cut some paper to make snowman eyes and a nose and put the elf on top. Add a note that says: “Do you wanna build a snowman?” 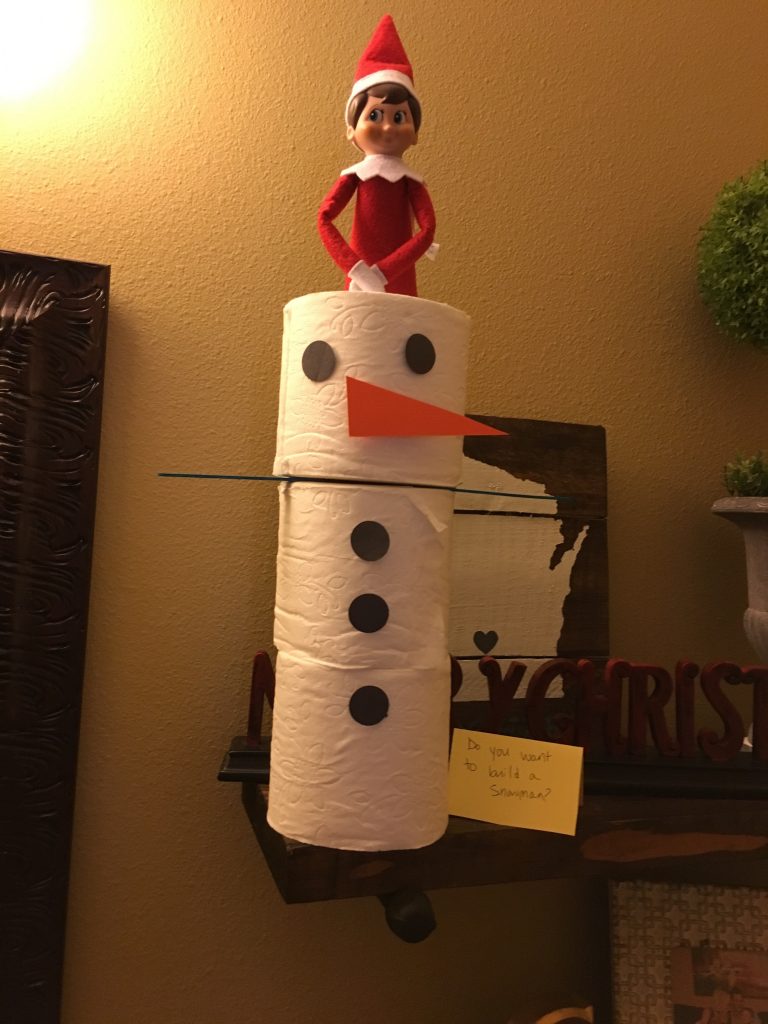 Grab a thermometer and some tissues and lay him down to rest! 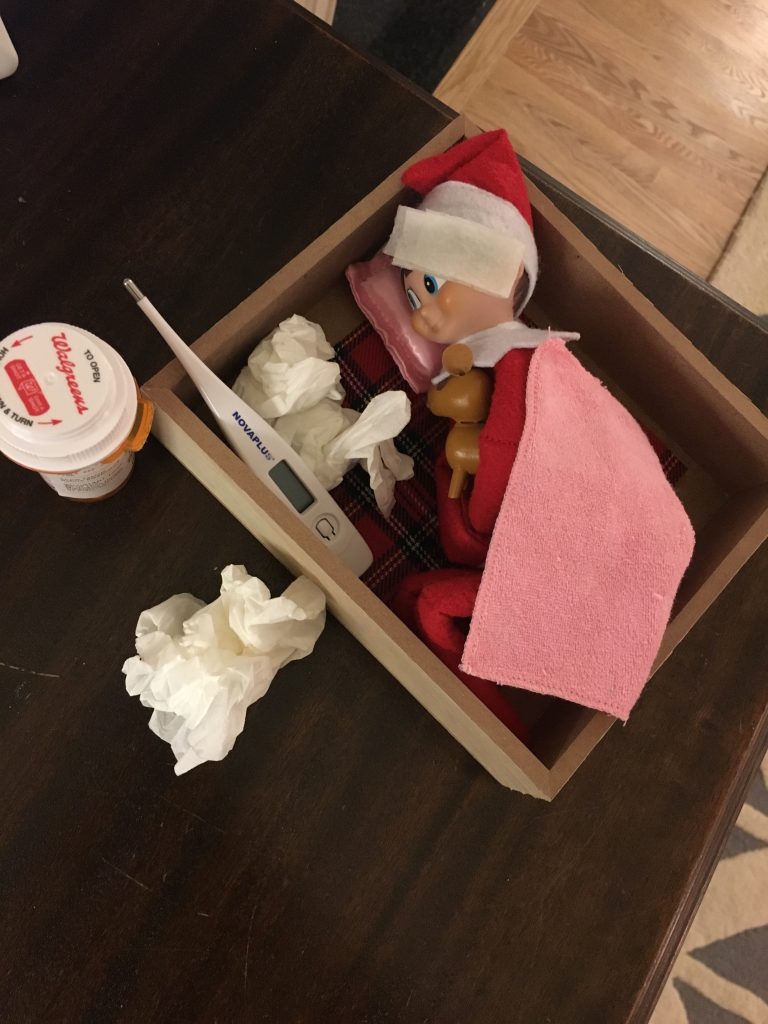 Grab a carrot and use a cheese grater to shred the carrot. On a piece of paper write ‘Snowman Nose Rejection Center’. 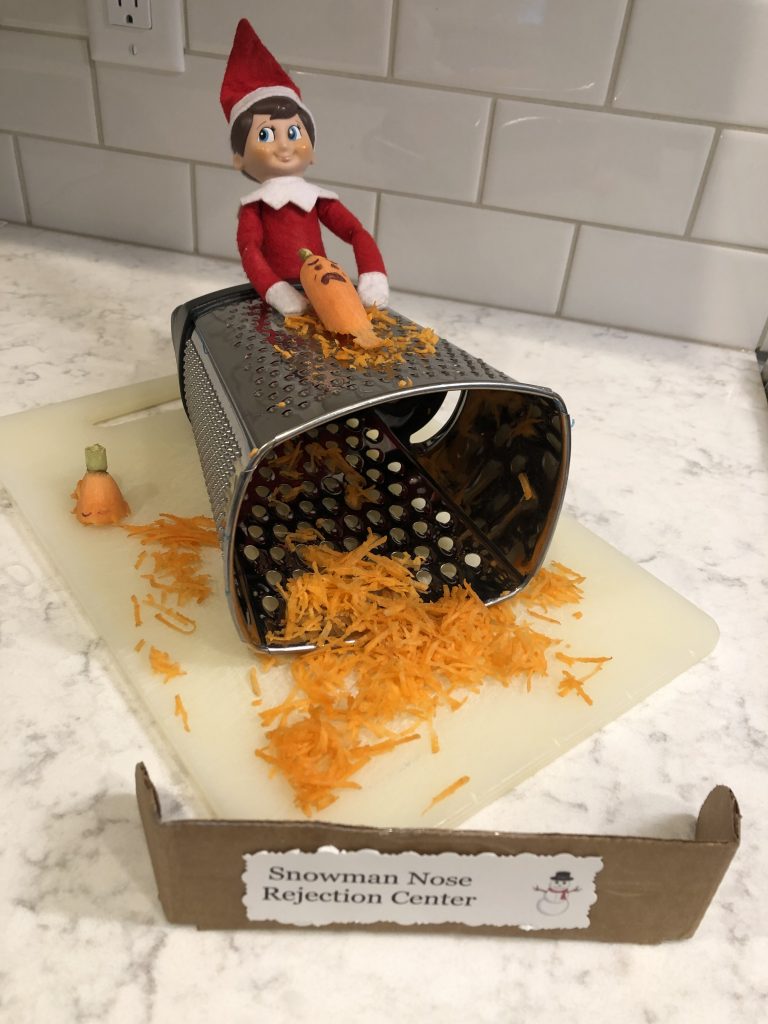 I See London I See France

Tie some underwear to a light and put the elf in the undies and leave a note that says: I see London, I see France… I’m flying in your underpants! 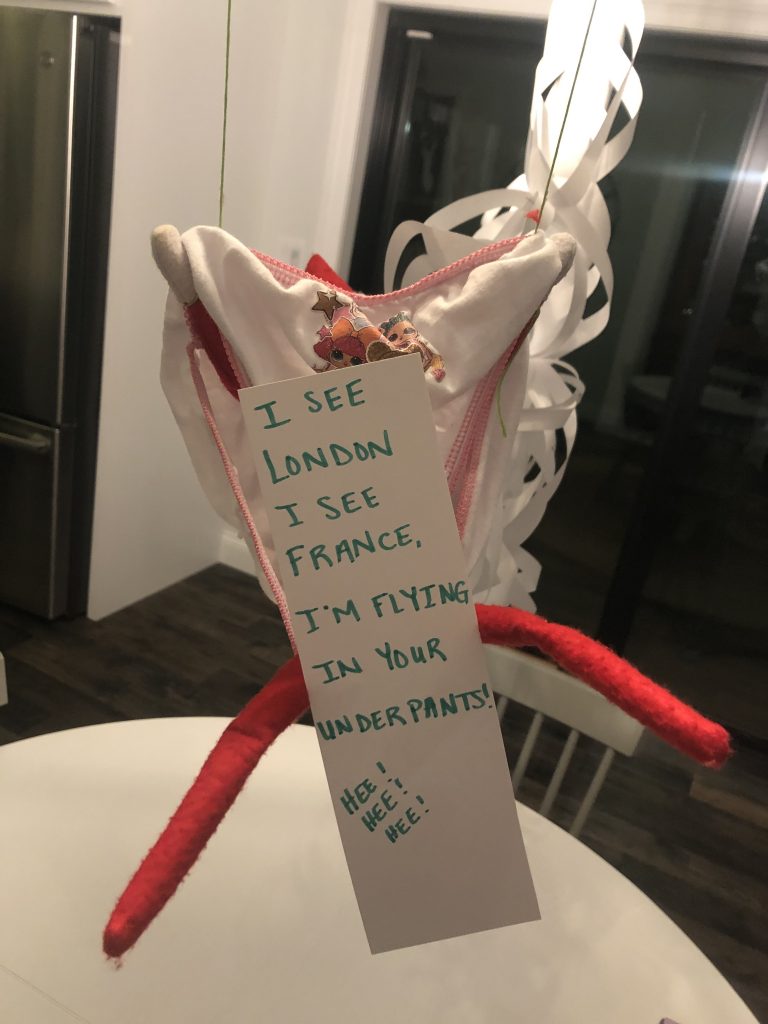 Make little cucumbers out of paper and tape them to his/her eyes; make a sign that says Quiet please! Spa treatment in session… and put marshmallows in a little bowl for the elf to soak his feet. 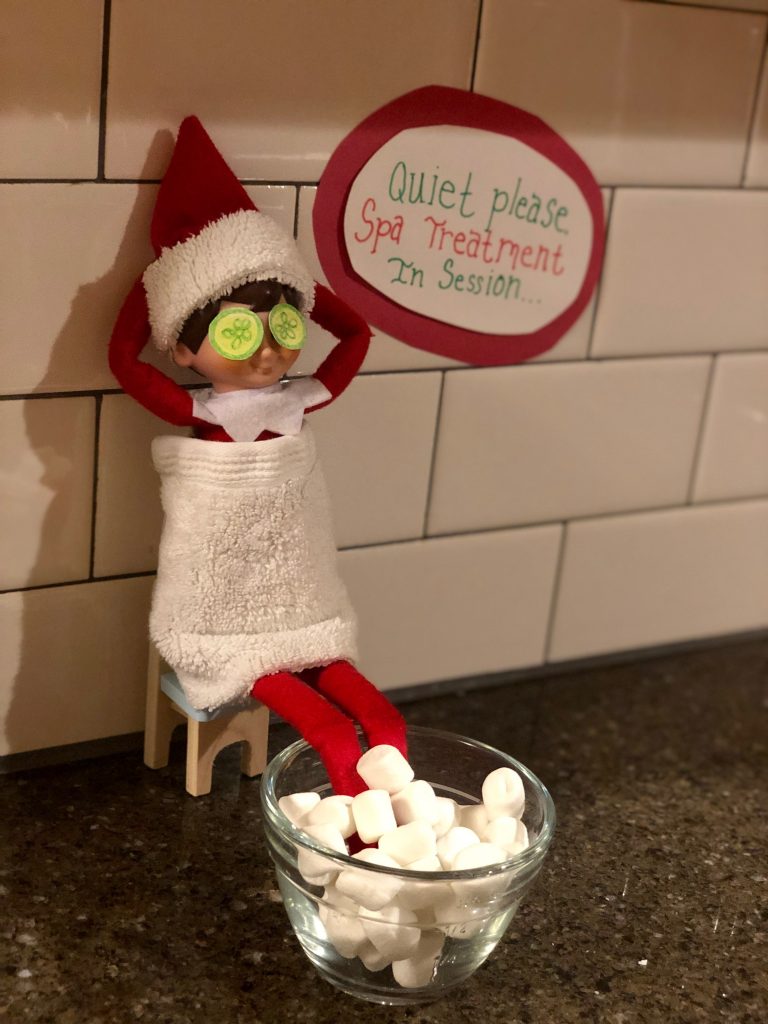 Use Legos to Tie Him up! 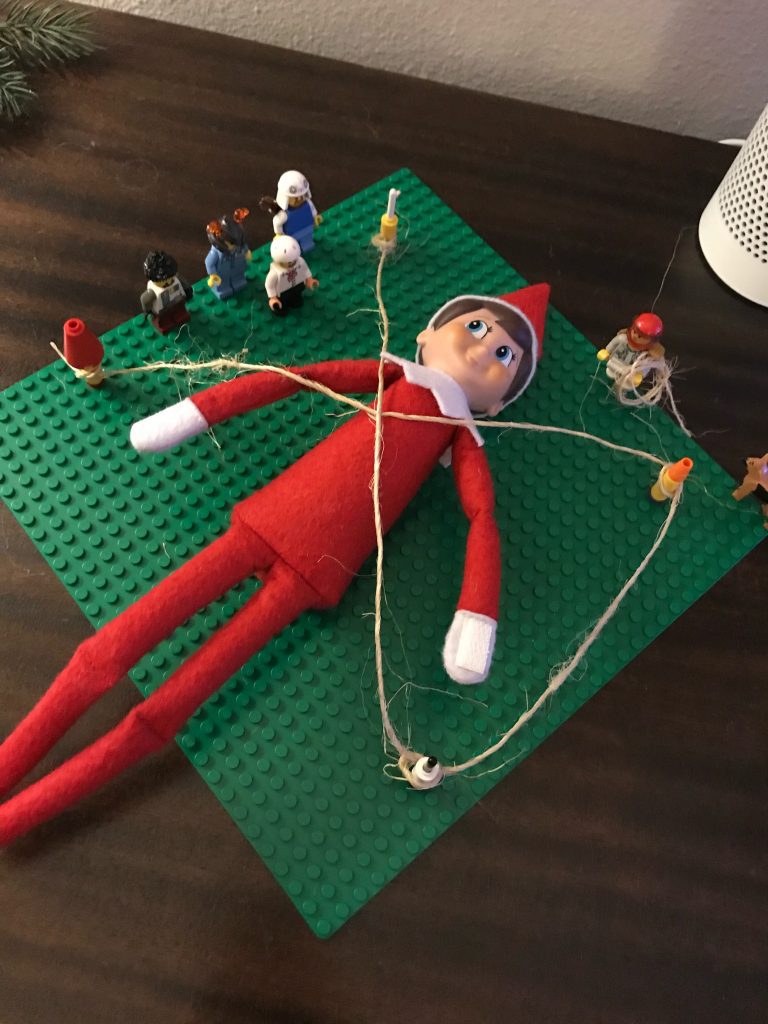 Zip Line through the Living Room 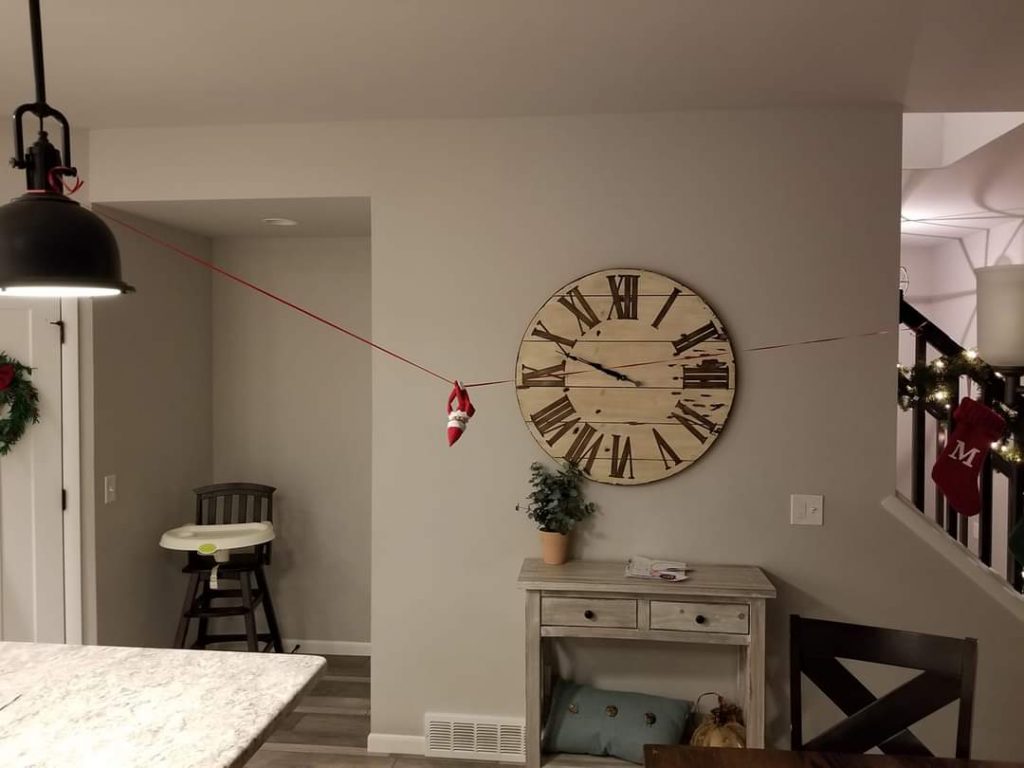 Tie a string from your light to the wall (or a place where you can tie a know/hook).

Stuck in an Upside Down Glass

Flip a glass upside down and put it over the elf. Write HELP on a piece of tape on the glass!

Instead of a snow angel, have the elf make a ‘sprinkle angel’ – do it in a pan to reduce mess!

Build Snowflakes out of Q-Tips

Get out a bunch of q-tips and create designs that look like snowflakes.

Put X’s and O’s on marshmallows (with sharpie) and draw the tic tac toe game board on a sheet of paper!

Have Santa say hello — spell. it out with skittles or M&Ms.

Set up the Candyland game (or any other board game) and have the elf play a game. For extra fun, include Barbie or Action Figures or LOLs… whatever you have!

Replace the Stockings with Kids Undies

This one always makes my kids laugh! Remove the stockings and in place, hang up some of their underwear.

Google Eyes on the Fruit

Get some google eyes and put them on all the fruit! For extra fun, leave a note from the elf that says ‘I’ve Got My Eyes On You!!!’

Playing with a Deck of Cards with Barbie

Get out the cards and set up a card game. Add in Barbie or friends for added fun!

Spell Something Out with Marshmallows

Spell out ‘BE GOOD’ or ‘I LOVE YOU’ or ‘HI’ with marshmallows.

Draw Some Faces on the Eggs

Draw some faces on the eggs with sharpie!

Have your elf write on the carton of milk (ELF MILK) and then pour some in a glass and put in some green food coloring!

This is one of my favorites! Buy a small box of candy canes and hide them in your home. Then have the elf sitting in the empty box with a note telling the kids to find (#) candy canes!

The Floor is Lava

Tape the elf to the wall (or adhere him somehow) and put a paper below that says ‘The Floor is Lava’, add a volcano to the pic for extra fun.

Grab a sharpie and draw some faces on those bananas!

Put 4-5 apples in a line, use a sharpie to make eyes and tooth picks (or pipe cleaners) for antennas. Have the elf hop on top!

Spell Something with Toothpaste

I don’t love this one (not a fan of messes) but if you don’t mind cleaning up — give the elf some toothpaste and have him write a message in the sink!

Pick up some mini sugar cookies at the store (Lofthouse brand always has yummy and cute minis) and put them in a bowl next to the elf! 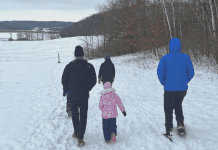 Tradition or Not, Let It Go! 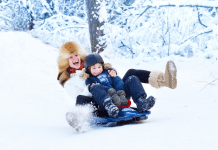 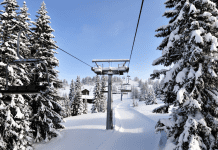 Madison Mom - June 13, 2022
(Madison, WI): We are thrilled to announce our 2022 Summer Playdate Series with Hilldale which will be kicking off on Wednesday, June 29 and...

13 Wisconsin State Parks Within One Hour of Madison

Guide to Breakfast on the Farm Events in Wisconsin this June...

Summer Festivals Happening In + Around Madison, WI in 2022