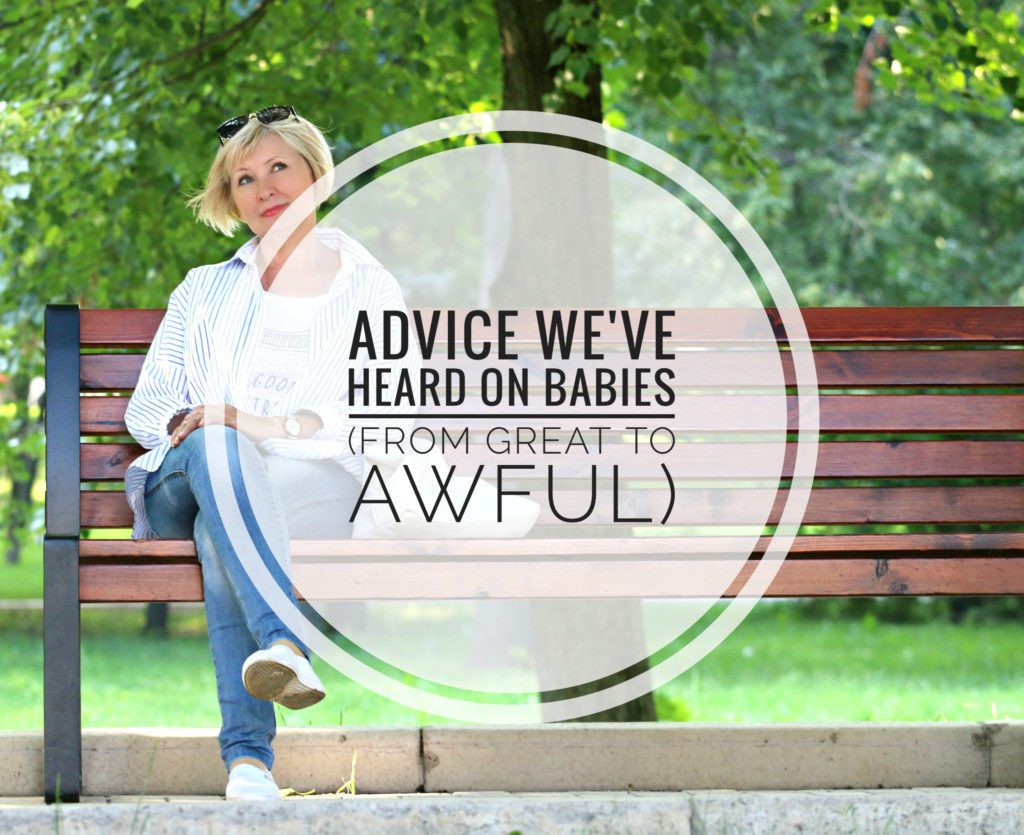 Every mother has a list of horrible advice given to her. Well-meaning strangers, wise grandparents and correcting mothers-in-law will interject on parenting style. Most of this guidance overwhelms new mothers and causes seasoned mom’s eyes to roll, but a few pieces of advice prove undoubtedly helpful.

The Best and The Worst

Admittedly, I’ve received more bad advice than good. The ultimate cringe-worthy tidbit is to keep them awake during the day so that they sleep at night. Just, no. This is utterly and completely false. I learned that after three babies and plenty of sleepless nights. I still hear it and can’t help but burst into displaced, crazy-lady laughter.

Oppositely, my absolute favorite opinion is that sleep begets sleep. I struggled with understanding newborn sleep patterns at first, but I quickly learned that a sleep-deprived baby is WAY harder to get to fall sleep than a well-rested one. It defies all logic, but hey, that’s babies.

Another good piece of advice that I’ve heard and passed down to other concerned mothers is that babies won’t eat if they aren’t hungry—as in if they are eating, keep supplying food! I once considerably worried about my baby getting enough food; if he was overeating and whether or not I was setting him up for obesity by continually feeding him. It’s true: feed them if they are eating. We’re born with the ability to feel “full” and babies know when they’re full!

The absolute worst guidance I’ve ever received was given to me in the hospital following the birth of my first baby. I was thrown into motherhood and had no idea what I was getting into—besides an insane amount of research on my end. Well I’ve done enough research to understand the basics of breast-feeding and that I wanted to nurse my son. He latched right after birth. Things were going well—or as well as they can go in those first few days of breast-feeding (ouch). Along came his first full day of life and my first meeting with the lactation consultant. She judged his latch and noticed that he was too sleepy to finish a nursing session—which is totally normal for a newborn baby. She actually told me that if he couldn’t successfully nurse within three hours, I had no choice but to start formula. Now, there’s nothing wrong with choosing to do formula, but that wasn’t my plan. This lady made me crumble to tears with that lovely advice. Luckily, awesome resources, friends, and my husband encouraged me otherwise and we voiced our concern about this suggested advice to the doctor. The doctor reprimanded the lactation consultant and gave us a coffee gift card. Almost an equal trade-off: tears for coffee.

Other Mom’s blog Writers Have Heard

Falicia’s had her fill with sleep advice like me: [quote]They sleep better on their stomachs” (OMG!), “Sleep when the baby sleeps” (literally never works for me but I salute those who can make it work!), “Try letting him/her stay up later and maybe she’ll sleep in![/quote]

Tara remembers her worst advice received:[quote] don’t rock them to sleep or hold them till they fall asleep or they will never fall asleep on own – I completely ignored and rocked my girls as long as they let me, I don’t regret that time rocking and snuggling one bit![/quote]

The best advice Tara’s heard is: [quote]Do motherhood your own way. They’re is no blueprint, most of us just wing it. Totally helped me at some low moments.[/quote]

Jenny’s worst has been: [quote] Better you than me!” (That’s not advice, but I heard that.) “Get your sleep now. (when pregnant)” Um, there is no way to save it for when I need it! “Enjoy them when they’re young/this age, because they grow up fast.” I have never, ever benefited by being told this. I understand the intent, but when they’re little, it just doesn’t help to be told time goes faster than you think.[/quote]

Jenny’s Best:[quote] Trust your instincts. Put them to bed early and consistently. Don’t let them smell your fear. Ha ha, just kidding. But if they see you nervous/afraid/stressed out, they will pick up on it and feed off it. At day care drop-off, when they get hurt, etc.[/quote]

Julie recalls a classic bad direction: [quote]”Put a hat on him!” When its 90 degrees.[/quote]

Laura heard: [quote]He is going to suffocate. I had my son in a front baby carrier facing me at grocery store when he was still only a few months old. Great-grandma-generation woman was convinced I was harming my kid. (Carrier simply allowed me to grocery shop.)[/quote]

Jessica can remember: [quote]Similar to Jenny, I never enjoy hearing, “Enjoy every moment.” Not so sure it is advice but I have heard it a lot. Also similar to the hat situation my family was obsessed with putting socks on my kids in the house. We have hardwood floors and they would slip, plus they just pulled them off. But they would be sure to say nice and loud, “Oh boy, your feet are SO COLD!!!!” Followed by them putting socks on my kids…followed by my kids pulling them off [/quote]

What is some outrageous or life-saving advice you’ve received?